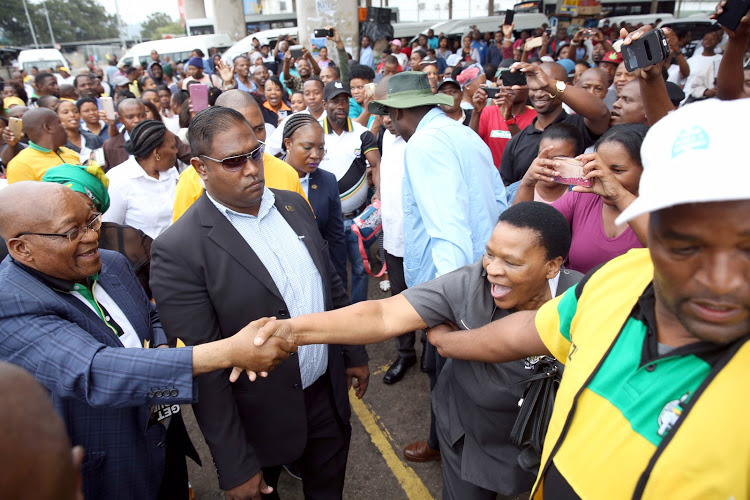 Former president Jacob Zuma was on the march through the Pinetown taxi rank in Durban on Friday‚ as the ruling party ratcheted up its campaign toward the 2019 polls.

He was mobbed the throngs of commuters‚ who cheered and chanted his name‚ an indication that the elder leader remains a strong drawcard for the ANC ahead of general elections next year.

His appearance forms part of a weekend-long blitz‚ with party events planned across KwaZulu-Natal.

Support for Zuma and the ANC seemed untrammeled on Friday‚ even after a bruising week for both at the Commission of Inquiry into State Capture.

Former president Jacob Zuma raised the spectre of factionalism and divisions in the ruling party while he was campaigning in KwaMashu on Friday November 16 2018, insisting that people be loyal to the party and not its leaders.

Former President Jacob Zuma is received by an excited crowd at the Pinetown taxi rank. His security are having a tough time keeping his fans back @TimesLIVE pic.twitter.com/626qfEMD0r

Zuma is warmly greeted by commuters as he hands out pamphlets. All part of a push by the ruling party ahead of elections in 2019 @TimesLIVE pic.twitter.com/YDF680fhu8