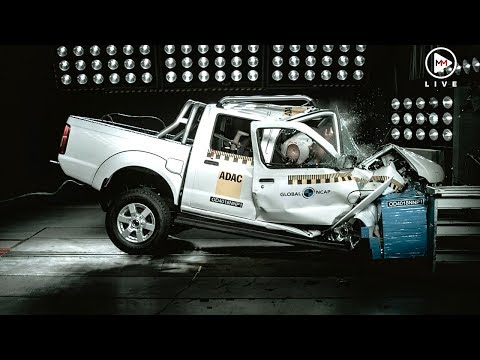 Crash tests have proved that the Nissan Hardbody is not safe.
Image: FILE

“It’s very clear to me,” Global New Car Assessment Programme (NCAP) secretary-general David Ward said as he stood next to the crash test remains of the Nissan NP300 bakkie. “Either Nissan are very poor engineers or they are simply lying.”

In a video‚ Ward was referring to Nissan SA’s comment that “the safety of our customers is our top priority” — in reaction to the news that its Hardbody bakkie‚ sold in SA and several other African countries‚ got a zero safety rating in recent crash tests undertaken by Global NCAP in Germany.

The bakkie achieved two stars for child-occupant protection‚ with Nissan having decided to install one of the child seats without following the child-seat manufacturer’s clear instructions.

Global NCAP secretary general David Ward has taken aim at Nissan over the vehicle manufacturer’s claims that “safety of our customers” was its top priority in the wake of the dismal performance of its NP300 Hardbody bakkie during recent crash tests in German. Subscribe to TimesLIVE here: https://www.youtube.com/user/TimesLive

Now Ward and Automobile Association of SA CEO Collins Khumalo have written to the UN Economic Commission for Africa‚ the African Union and the African Development Bank‚ calling for urgent action by African governments to prevent the sale of zero-star cars‚ such as the Nissan NP300.

“The zero-star result of the NP300 is particularly troubling as the car is fitted with dual airbags and this might encourage consumers to believe that the car has a good level of safety‚” they said.

“Indeed‚ Nissan’s misleadingly claims that the car occupants are protected by a so-called ‘Safety Shield’ and its ‘Hardbody’ label also conveys an image of strength.

However‚ in our crash test‚ the car’s bodyshell collapsed and neither the steering column nor the airbags acted as they should to minimise risk of injury.

“In our view‚ remedial action to strengthen the NP300’s bodyshell is now urgently needed.

“This is a concern not just in SA but elsewhere as Nissan has plans to increase exports of this vehicle across Africa.”

Khumalo has called the NP300 results “outrageous”‚ saying they reveal that “unsafe vehicles are being sold to the people of Africa‚ which no manufacturer would consider selling in other markets”.

“The safety of our customers is Nissan’s top priority. All our cars meet or exceed regulations in all countries in which they are sold.”
News
3 years ago

Nissan SA’s response to Global NCAP’s call for African governments to prevent the sale of the NP300 and other zero-star vehicles was word-for-word the same as that when the bakkie’s crash-test results were released at a Johannesburg press conference two weeks ago.

“The safety of our customers is Nissan’s top priority. All of our cars meet or exceed regulations in all countries in which they are sold.

“The Nissan NP300 is a tried-and-trusted partner for businesses and entrepreneurs‚ providing reliability and affordability.

“Continuous improvements are being made to the NP300 such as dual airbags and ABS brakes which are fitted as standard equipment. Nissan is studying further enhancements‚” the manufacturer said.

Khumalo said that aiming to meet or exceed minimum standards was not the same as making vehicles with acceptable safety standards — “and manufacturers know this”.

“These standards must change‚ and we need urgent intervention from policy makers to make this happen.”

Only two out of 25 car models currently priced under R160‚000‚ vetted by the Automobile Association in South Africa‚ have “acceptable safety”.These ...
Business
4 years ago

Ward and Khumalo urged the organisations to encourage African governments to apply the most important UN vehicle-safety regulations and to encourage public and private motor vehicle fleet operators in Africa‚ including the UN’s own fleet managers‚ to adopt Global NCAP fleet safety guidelines‚ which recommend the purchase of vehicles that exceed a crash-test rating minimum of four stars and pass the most important UN vehicle regulations.

In other countries‚ such as Australia‚ fleet managers’ demands for safer cars have led to similar demands by the general motoring population.

Global NCAP’s aims are threefold: “To stop the sale of zero-star cars in Africa; to ensure that consumers can be sure that the vehicles they purchase at least meet minimum UN standards — including electronic stability control — and to contribute to at least halving road deaths and serious injuries in Africa by 2030.”