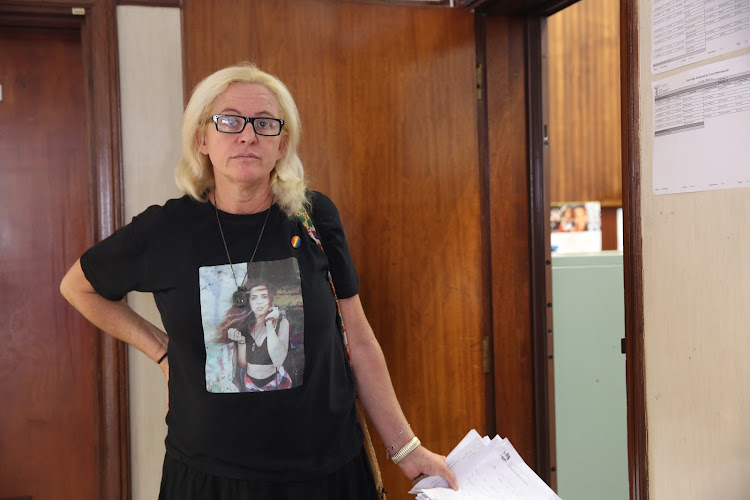 Siam Lee had been held captive for more than 24 hours before she was bludgeoned to death and her body set alight in a secluded sugarcane field in New Hanover in central KwaZulu-Natal.

What investigators believe befell the 20-year-old in her final moments was laid bare in the Durban Magistrate’s Court on Wednesday, when the businessman accused of her kidnapping and murder was indicted.

This comes a full 11 months after the escort’s kidnapping and murder after allegedly being snatched by the man from a Durban North brothel.

The businessman stood in the dock staring blankly ahead while Lee’s mother, Carmen, sat in the gallery at his back and wept. 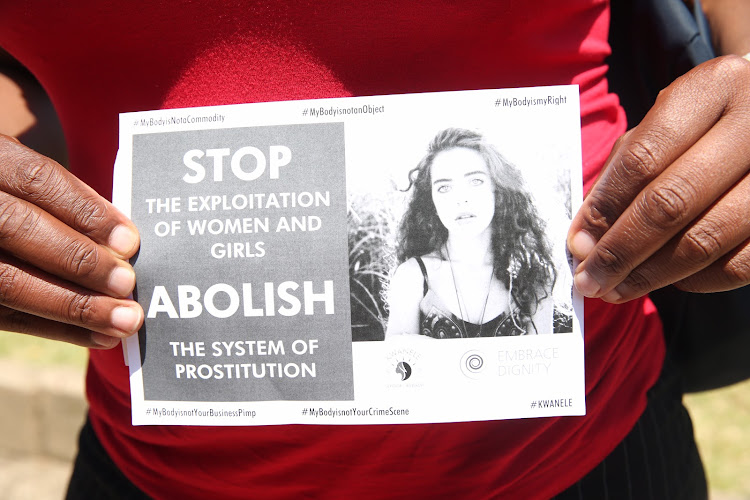 Women show support for slain escort Siam Lee outside the Durban Magistrate's Court on Wednesday, where the man accused of her murder appeared. In the weeks before her death the 20-year-old had reached out to sex-worker support groups to help her escape her double life.
Image: Jackie Clausen

The 30-year-old faces a raft of charges‚ including the kidnapping and murder of Lee‚ as well as the rape of another woman. He cannot be named until he has tendered a plea in relation to the rape charge.

State prosecutor Surekha Marimuthu, in outlining the state’s case,  painted the accused as a jilted lover.

"He was a previous client of the deceased (Lee) but on January 4 she no longer wished to have any contact with him. As a result he decided to kill her," she said.

"When the opportunity presented itself, he accosted her and forced her into his car before fleeing at high speed," Marimuthu added.

Mickey Meji speaks on behalf of survivors of the system of prostitution outside the Durban Magistrates court where the man accused of murdering Siam Lee appeared .@TimesLIVE #SiamLee pic.twitter.com/93FAkxT9r6

"He held her captive at his residence until about the following midnight when he decided to kill her. To this end he forced her into the back of his vehicle and set out for New Hanover.

"On arrival in the early hours of the morning he removed her from the vehicle and threw her into a nearby sugarcane field, doused her with petrol and set her alight."

Her charred remains would later be discovered by a farmer who was on a fishing trip with his grandson.

The suspect was released on R40,000 bail in June after a protracted bid which stretched over months.

Strict conditions were imposed, including a stipulation that he report to a police station three times a week.

On Wednesday magistrate Vanitha Armu refused an application to have his bail conditions relaxed.

Women from Kwanele, a group campaigning against gender violence and women abuse, had swelled the public gallery during the man's appearance. When he stepped down and walked from the court, the throng followed on his heels with sniping insults thrown in his direction.

Lee, using the moniker "student in training", had worked as a sensual masseuse with her mother.

The Sunday Times reported that Lee had reached out to an organisation that assists sex workers‚ pleading for their help in the weeks before her murder.

She detailed her despair at having to lead a double life while moving from one brothel to another‚ all the while maintaining a façade for her family and friends.

The accused will appear in the Durban High Court on March 11 next year.