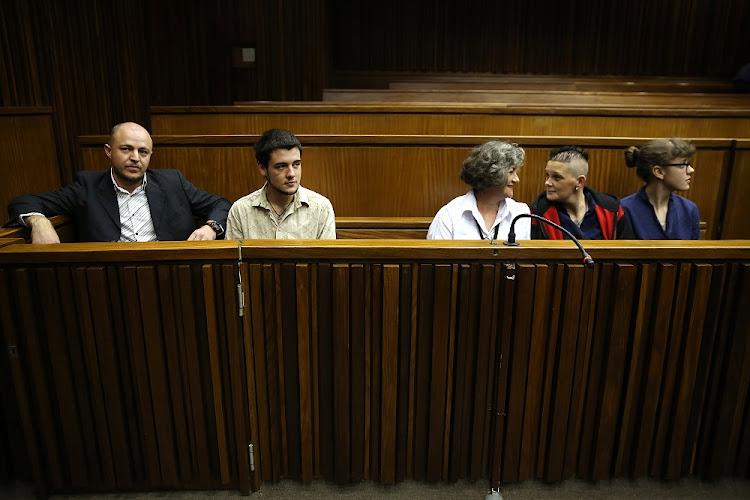 An obsession with satanism by followers of two fringe religious organisations on the West Rand is taking centre stage in the Krugersdorp murder trial in the South Gauteng High Court.

The current state witness, Ria Grunewald, was a leader of the Overcomers Through Christ (OTC) group and had a close relationship with prime suspect Cecilia Steyn, a wife and mother of two - until they had a falling out.

Steyn broke away from OTC to form the Electus Per Deus (Chosen by God) group. The state's case is that she roped neighbours and friends into the group, who then allegedly murdered 11 people between 2012 and 2016 in a dual quest, first for revenge and then for cash.

On Wednesday, Grunewald testified that she had treated Steyn like a daughter and had tried to help the troubled woman.

The two were then part of the OTC group. Grunewald taught Bible courses titled "Know your enemy", and "Know your saviour". She said she hardly ever went to her own place and spent little time with her children because she was taking care of Steyn.

The High Court in Johannesburg on Tuesday ruled that a statement taken by an investigating officer in 2015 - in which one of alleged “Krugersdorp ...
News
3 years ago

Steyn, she said, had claimed to have matriculated at 14 and boasted that she had three qualifications. "We were told that she was a qualified pastor and that she had done an LLB," said  Grunewald. Steyn was also "known to have a qualification in psychiatry", she added.

Grunewald told the court that she believed every story Steyn told her and everyone else.

According to Grunewald, Steyn claimed to have been tortured and abused by her father who was part of a cult.

He would hang her over a lion's cage, according to one of Steyn's claims. "She would go into a fit if we were watching a TV programme and they showed lions attacking people. I would pray for her."

She said at one stage, Steyn had turned into a "baby" and started crying.

"She had bought me perfume and she told me that I have to wear it to smell like 'Elise'. When she cried, I hugged her. She then said [in a child's voice] 'mommy, why are you shape shifting?'"

Grunewald explained to court that shape shifting is when a person changes into another person.

The "baby" that Cecilia had apparently turned into, did not recognise Grunewald because she did not look like her mother "Elise".

The "baby" then bit her own arms. Grunewald said: "She said she had to offer me her blood for hugging her. The strange thing is that there were two teeth marks on the vein in her arm."

The court also heard that Steyn wanted Grunewald to be with her most of the time because she suffered from spiritual attacks.

Steyn suffered the attacks mostly on "high nights" when, according to Grunewald, sacrifices were taking place.

The group had to gather at Steyn's flat to protect her from satanists. "I would instruct people to pray. We would try our best to keep her in her body," Grunewald said.

During the spiritual attacks, Steyn's spirit would be taken by satanists at a ritual site and put in someone else' s body. "Through her movements, we could tell what was going on. Once she stretched her arms out and I saw marks on her wrists, then I knew she was crucified," Grunewald claimed.

"The demons would rape her and I had to keep my oiled hands between her thighs to prevent the demons from raping her."

To prevent her eyes being gouged out by the demons, Grunewald would put her oiled hands over her eyes.

When the attacks were over, Cecilia would be in a lot of pain, Grunewald said.