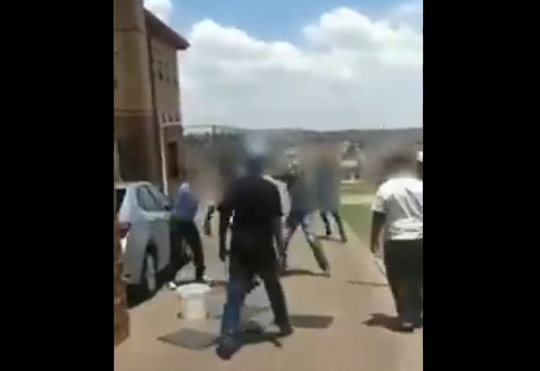 A Soweto pupil threw a brick at a teacher on school grounds, November 2018

A pupil from a mentally challenged school in Soweto will not be suspended due to his condition after he was filmed throwing a brick at a teacher, the Gauteng education department said on Wednesday.

A mentally challenged pupil from a school in Soweto will not be suspended due to his condition after he was filmed throwing a brick at a teacher, the Gauteng education department said on Wednesday.

I have been patient with him for too long. Today, he will k*k himself

In a video doing the rounds on social media, the teacher is seen running from a pupil at the school.

The pupil takes a brick and throws it at the teacher. A few seconds later, the teacher falls to the ground and the pupil runs towards him and kicks him. Taking one last look behind him, he bolts for it.

“What a silly child that is,” another teacher is heard saying, while another encourages the teacher to run.

“What is your problem?” one teacher asks the clearly aggravated pupil.

“I have been patient with him for too long. Today, he will k*k himself,” the pupil replies.

One teacher tries to speak to him but the pupil replies: “Ma’am, leave me alone,” and runs after the teacher.

“Bheki, Bheki,” the other teachers call out to the pupil.

“Call the cops, guys. Call the cops. [The teacher] cannot be chased around by a child like this,” one person says.

Teachers under siege from pupils

The teaching fraternity is under siege and it seems the ANC government isn't doing enough to assist teachers who are subjected to humiliation by ...
Opinion
3 years ago

“Is the principal not here?” another asks.

“Our cars,” one teacher says concerned.

“He should continue running,” the teacher advises her colleague who is under attack.

Other male teachers eventually get hold of the pupil.

“We are reprimanding you,” they shout at him.

“I have put up with this for too long. It is now the end. Today is the day we beat each other up,” he replies.

“I have wanted to beat him up for so long,” he continues.

Other teachers in the background are heard saying that the pupil thinks the teacher is afraid of him. Meanwhile, the student cannot be calmed down.

“I am tired of persevering, meneer. I am tired. I am also human. I also get fed up,” he tells the group of male teachers surrounding him.

“But he is your meneer [teacher],” they tell him.

The Northern Cape department of education has suspended a Kimberley Boys' High pupil after he was filmed throwing water in a teacher's face in class.
News
3 years ago

“I am tired of sir, he has treated me badly for so long,” he tells a female teacher, as he is still in the grip of the other male teachers.

“I am tired of him. He can beat me up if he wants to,” the pupil replies.

“But he did nothing to you. You are provoking him,” the female teacher tells him.

Teachers continue to discuss the incident, with the one supposedly recording, saying all that needed to happen was for them to call the cops.

“On the day the school hosted a Commonwealth ambassador who visited the school to donate wheelchairs. The learner was aggrieved after the educator attempted to discipline him in the school hall during the event, as he was part of the noise makers,” Mabona said.

Mabona said the teacher sustained minor injuries from falling, but medical attention was arranged to assist him.

“The learner is still allowed at school and, due to the nature of his behavioural disability, cannot be suspended,” he said.

“We are facilitating a diversion programme for the learner to address his behavioural challenges.”

The teacher has returned to the school. A psycho-social support team has been dispatched to the school to offer counselling to all affected by the incident, said Mabona.

A video of a mentally challenged student throwing a brick at his teacher is going viral on social media. The department of education confirmed the incident and said the student would not be suspended due to his condition.