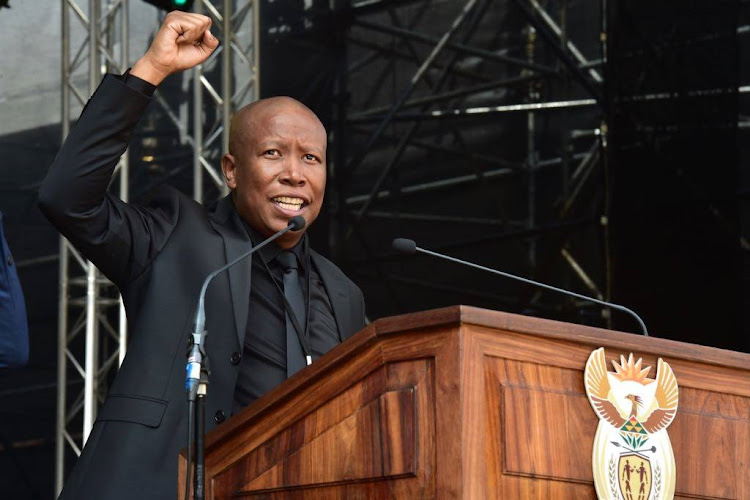 This after Malema's car was seen escorted by a white BMW sedan with blue lights in and around parliament last week.

The EFF has previously reported that Malema's life was being threatened.

Police spokesperson Vish Naidoo confirmed to TimesLIVE that Malema is being protected by the police after due processes were followed. "I cannot divulge details of his protection for security reasons‚" he said.

EFF spokesperson Mbuyiseni Ndlozi said the party has on many occasions spoken about threats against its leader‚ who is also an MP. "The police made their independent assessments and arrived at the same conclusion as we did - that is‚ his life is under threat."

The bodyguards of EFF leader Julius Malema allegedly fired live rounds at party members who threw bottles at his car when he was leaving a party ...
News
3 years ago

In April‚ the EFF said it had been alerted of "nefarious and evil plans" to assassinate its leader and that it was not taking the threats lightly. It alerted police minister Bheki Cele‚ demanding that action be taken against all threats on its leadership.

The party also stepped up its own security. It said the covert plans originated from the North West where a small group of "politically insecure and insane individuals" had approached drug dealers and assassins in different provinces‚ particularly in the Western Cape‚ to assassinate Malema ahead of next year's general elections. The alleged threats coincided with a plan by the EFF in North West to table a motion of no confidence against then premier Supra Mahumapelo in the provincial legislature.

It was all an act: Malema sticks to his guns over ‘rifle’

Julius Malema is sticking to his guns and continued to insist that he did not fire a real gun.
News
3 years ago

The EFF said they were also getting threats from "right-wing forces" and those threats were linked to the party's position on land expropriation without compensation and what it described as a relentless war against racism.

It is not the first time that Malema is being afforded police protection.

In 2009‚ there was a huge outcry from opposition parties when it was revealed that Malema‚ then ANC youth league president and close ally of president Jacob Zuma‚ was receiving protection to the tune of up to R300‚000 a month. The police said Malema's life was in danger‚ that he had received death threats and that crime intelligence had conducted an investigation which had revealed that indeed there were threats to his life.

By law‚ any person who occupies a senior position‚ be it in government‚ business or political office‚ and is a South African‚ can apply for protection if they believe that their lives are in danger‚ said the police at the time.