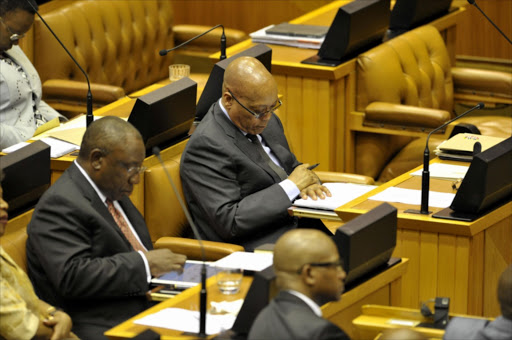 President Cyril Ramaphosa has blamed the 10 years of former president Jacob Zuma’s tenure for the troubles the country is facing.

He cited high levels of unemployment and corruption as key issues his government needed to address with speed.

Ramaphosa was in East London on Sunday as part of his Thuma Mina campaign‚ aimed at speeding up service delivery across the country.

Addressing hundreds of ANC supporters at the Winter Rose stadium in Mdantsane‚ Ramaphosa said: “We are fixing things‚ and even those who were stealing money are on their heels‚ because we want our money back so that we can use it for service delivery. We want to fix things‚ because we want to create jobs because our people are not working.”

His words were greeted with loud applause.

Cyril blames Zuma for mess: ‘We want our money back so that we can use it for service delivery’https://t.co/omY3jq8632 pic.twitter.com/Sr7ordjBry

Other top ANC officials‚ including the 80-member national executive committee (NEC)‚ visited various regions in the province at the weekend to listen to what voters expect from the governing party if it wins at the polls in May next year.

'Looting would be normal in ANC'
News
3 years ago

Finance minister Tito Mboweni has labelled state capture as one of the "greatest heists of our times".
News
3 years ago

If you were to list the different cabinets SA has had since 2009‚ you’d need 14 columns.
News
3 years ago

The SA economy could have been up to 30% or R1-trillion larger had the country kept pace with other emerging markets and Sub-Saharan African ...
News
3 years ago
Next Article