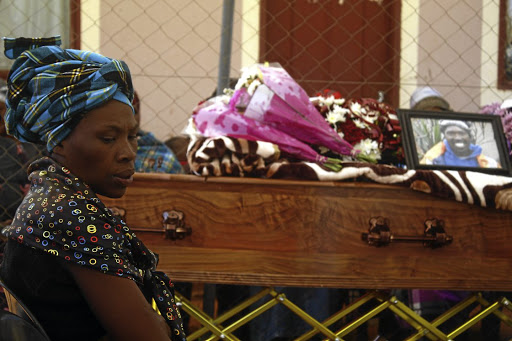 Jabulile Mgiqwa next to the coffin of her brother, Vusi Mgiqwa, who was allegedly punched by a white motorist and landed on his head in Selcourt, Springs, on October 26.
Image: KABELO MOKOENA

Vusi Mgiqwa's body left his home in Tsakane for the Nigel cemetery, on the East Rand, where he was buried in a procession fit for a political hero.

But Mgiqwa was an ordinary man who spent his entire adult life as a car guard in Selcourt, Springs, in Ekurhuleni.

This was a place where Mgiqwa's life was cut short last month after he was attacked allegedly by Lukas van der Merwe, 39.

Mgiqwa, 25, was allegedly assaulted by the motorist on October 26.

An eyewitness, who had come to buy food at one of the restaurants said that the motorist punched Mgiqwa unprovoked. He fell on his head and later died in hospital.

Mgiqwa was a man loved by many and his story had touched even those who did not know him as evidenced by his funeral. The hearse carrying his body was followed by a group of ANC members who sang Struggle songs.

A long queue of cars followed by a bus caused traffic congestion in the dusty streets of Ematreyinini, a place where Mgiqwa lived with his father, three sisters and girlfriend. The street leading to his home was closed off as people overflowed from the little white marquee erected to host his funeral. In the marquee were bishops, pastors and apostles from various churches who braved the scorching sun to give support to the Mgiqwas.

The family of the car guard who was brutally killed in Springs, Ekurhuleni, has called for the man accused of murder not to be granted bail
News
3 years ago

His family had struggled to raise money to bury him until a crowd-funding initiative was set up to help the family.

The Mgiqwas sat inside the yard of an RDP house quietly as they listened to words of comfort from different mourners paying homage to their beloved son.

Just as the funeral was about to begin, the deceased's father, Simon Mgiqwa, opened the coffin to allow family members to see him for the last time. His coffin was wrapped in an ANC flag.

Mourners described him as a peaceful man. "We are hurting because Vusi died violently. He was never sick. If he had been sick it would have been better," said Vusi's aunt, Nompi Mgiqwa.

Local ANC voting district coordinator Mavela Zwane did not mince his words on Van der Merwe and raised suspicions that this was a racist attack. "What is it that we have done to white people? What is it that they want from us as black people? Is it the beauty of our dark skin or our land? This is our land. We will live in this land until the Lord comes back," Zwane said.

Van der Merwe will apply for bail in the Springs Magistrate's Court tomorrow.