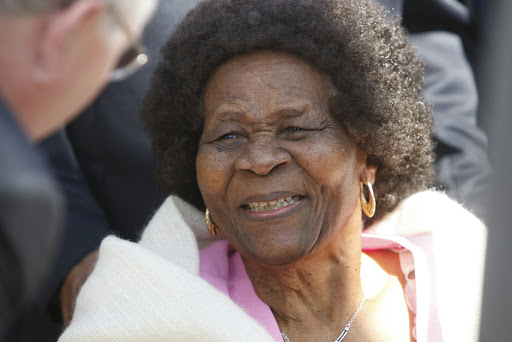 Albertina Sisulu during her honouring by The Church of Jesus Christ of Latter-Day Saints.
Image: Antonio Muchave / Sowetan / File

More than 100 women have gathered at the University of Johannesburg, Auckland Park campus, for the intergenerational women’s dialogue to honour Albertina Sisulu.  The event is led by Minister of Science and technology  Mmamoloko Kubayi-Ngubane.

Among the dignitaries are  Sisulu’s grandchild Nontsikelelo Sisulu-Singapi and Struggle stalwart  Sophie de Bruyn, who was the organiser of the 1956 women’s march against apartheid-era pass laws.

The women, some clad in ANC T-shirts, sang Struggle songs as they waited for  other dignitaries to arrive.  Masisulu wayekhona emzabalazweni  (MaSisulu was part of the Struggle), sang the women. The event started with the singing of the national anthem, afterwich  MEC for sports, arts and culture Faith Mazibuko welcomed the audience.

“If she was still with us she would be 100 years old. What is exciting is that we are who we are today because of her. If she never sacrificed her life and that of her family we would not have achieved this liberation,” Mazibuko said.

Remembering mama Sisulu, a role model to all

The late mama Albertina Sisulu worked to help the poor regardless of their colour or politics - Bam.
News
2 years ago

One of the veterans, Christina Boikanyo, said she regarded MaSisulu as her mother.

“She was always there [for me] … I remember when I was pregnant and I was arrested and sent to John Voster [she was there for me]. She is the one who brought clothes for my child. She did a lot of things for me. She would make sure that I had eaten and also paid rent. I am glad that today we are here to honour her life,” Boikanyo said.

Some of the issues that will be tackled at the event is how to improve the health and legal systems and how to  address gender-based violence.

They will also tackle how the government should address the triple challenges of poverty, unemployment and inequality.