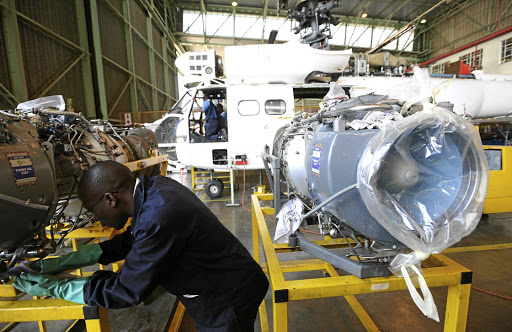 A mechanic works on an Oryx helicopter engine in a workshop hangar on the Denel Aviation site in Boksburg. Picture: KEVIN SUTHERLAND

State-owned weapons manufacturer Denel has fired its chief financial officer Odwa Mhlwana after he was found guilty of all disciplinary charges relating to irregular expenditure, the firm said on Friday.

Mhlwana had been put on suspension in June while Denel conducted a probe into allegations of misconduct by him.

Denel also said it had selected a new CEO, after the previous one resigned in May.

"An announcement is expected to be made by mid December 2018 once Cabinet approves the appointment," it said in a statement.

Reforming troubled state-owned entities such as Denel is a top priority for President Cyril Ramaphosa as he strives to put the sluggish economy back on a sustained growth trajectory.

Denel staff assured of payment as Treasury steps in

State-owned arms manufacturer Denel has told unions it has money to pay employees their salaries on 22 December‚ after treasury gave it a debt ...
News
4 years ago

Ramaphosa oversaw the appointment of a new board at Denel, which produces military kit including armoured vehicles for the South African army and foreign forces, in April in an effort to put the company on a firmer financial footing.

Earlier on Friday the National Union of Metalworkers of South Africa (NUMSA) said South Africa's government must urgently inject at least 7 billion rand ($491 million) into Denel in order for the firm to pay suppliers and implement its turnaround strategy efficiently.

Denel reported a 1.7 billion rand loss for the 2017/18 financial year and is struggling to pay worker salaries and deliver on roughly 18 billion rand of outstanding orders.

Around 100 members of the National Union of Metalworkers of South Africa (NUMSA) marched to the ministry of public enterprises in the capital Pretoria on Friday to press their demands.

The marchers carried placards bearing slogans including "Bailout Denel or no votes next year" and "Denel not for sale".

NUMSA and Solidarity, another union with members at Denel, have both rejected a management proposal to cut their salaries by around 20 percent from the end of November as part of short-term cost-saving measures.