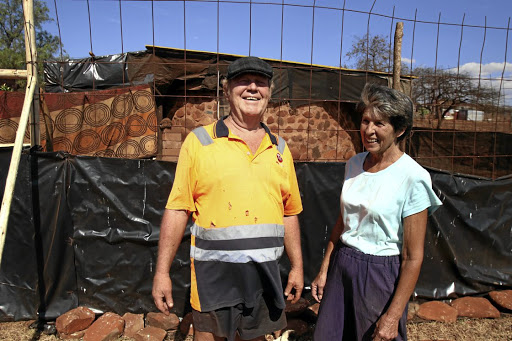 A white couple is among more than 70 families waiting for their RDP houses to be completed in a village near the town of Burgersfort, Limpopo.

Danie, 60, and Kotie du Toit, 57, have been living in GaMaepa village, a predominantly black community near Burgersfort, in the Greater Fetakgomo-Tubatse local municipality. More than 72 RDP houses in the municipality that has been accused of squandering R200m with an illegal deposit into VBS Mutual Bank, had been left unfinished since 2014.

Danie said they settled in the village since 2009 after arriving from the Free State.

"We built our two-roomed shack and everyone welcomed us with open arms.

"We are living with great people in this village. The crime rate is very low."

Pupil (13) to represent SA in Kenya

Du Toit said they had earned themselves a special place in the village through their simple interaction with the people. His wife Kotie said though village life was more challenging she had since acclimatised to the environment.

"People taught me how to push a wheelbarrow to carry water. The major problem is shortage of water in the area, and the municipality is failing us by failing to bring water tanks," she said.

The couple's unfinished RDP is now used to accommodate more than 30 dogs.

"These dogs keep us company and we just love having them around. We don't need special treatment because we are white. We want the government to complete all unfinished houses in the village," Kotie said. The couple said it relied on social grant to sustain themselves.

Neighbour Rosina Nkwana said she lived in peace and harmony with the Du Toit family.

"The husband is a handy man, he helps us with fixing our appliances and the wife knows how to knit. They are very humble people and we go to the river together to fetch water in wheelbarrow," Nkwana said.

"We have started with rectification process and Maepa village is also on the list. We have since terminated contracts of 11 companies after we did our assessment.

"We have recently appointed 14 construction companies to finish all RDP houses in the province," Galane said.