Zulu king slapped with lawsuit over land in KZN 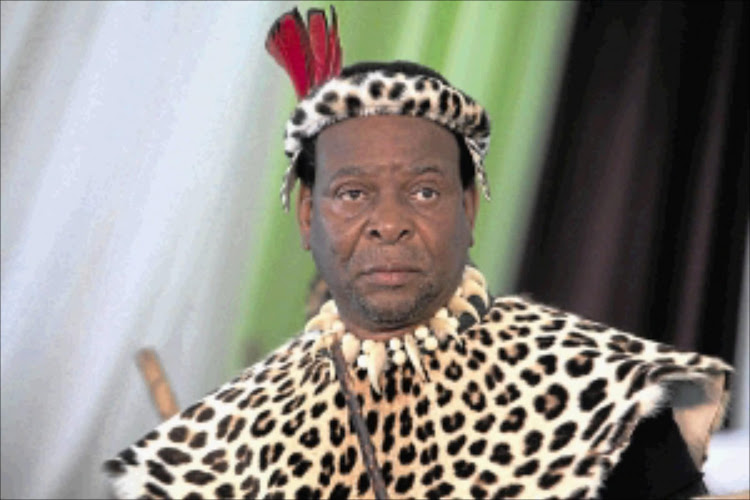 Zulu king Goodwill Zwelithini‚ who is embroiled in a legal wrangle with racist guest house owner Andre Slade over the payment of rental arrears for the land on which he lives‚ has now been slapped with court papers in a bid to compel him to stop forcing occupiers of land under Ingonyama Trust to pay rent.

The Zulu monarch was served with court papers by the Legal Resources Centre (LRC) on Tuesday. The LRC filed an application in the Pietermaritzburg High Court on behalf of the Council for the Advancement of the South African Constitution (Casac)‚ the Rural Women’s Movement and seven informal land rights holders.

The trust‚ which administers 2.8-million hectares of land on behalf of King Zwelithini‚ who is the sole trustee‚ was established in 1994 to be the custodian of the land previously administered by the former KwaZulu-Natal government.

But in court papers‚ the applicants argue that the trust acted “unlawfully and in violation of the Constitution” by cancelling PTOs and concluding lease agreements with the holders of PTO rights or informal land rights.

Casac secretary Lawson Naidoo said in his affidavit that since 2007 the trust and its board have been “undermining the security of tenure of residents and occupiers of trust-held land in KwaZulu-Natal”.

He also accused the trust of “extorting money from them by unlawfully compelling them to conclude lease agreements and pay rental to the trust to continue living on the land”.

In a related matter‚ Slade – who in 2016 shot to infamy by refusing to accommodate black people at a guesthouse in northern KZN‚ and by making multiple racist comments in the aftermath - was served with a letter of demand in April by the Ingonyama Trust Board‚ demanding the immediate payment of R62‚584 in rental arrears for the land on which he lives.

However‚ Slade said the board had picked a “royal fight” and refused to pay the rental fee because he and his Slovak lover Katarina Krizaniova didn’t recognise Zwelithini’s authority as king.

“In the name of Yahweh‚ almight God‚ we refuse to recognise and respect the so-called Zulu king. King is God’s title‚ yet the first commandment of God says ‘thou shall not have no other gods before me’‚” he wrote on his website.

Leave the Ingonyama Trust alone. That's the message from Zulu monarch King Goodwill Zwelithini who is headed for what could be a bruising battle with ...
News
3 years ago

The Ingonyama Trust has come under scrutiny recently after a high-level panel headed by former president Kgalema Motlanthe proposed the disbandment of the trust.

But the Zulu king has threatened to push for KwaZulu-Natal to secede should the government implement the panel’s recommendations and has warned strongly against any attempts to dissolve the trust.

Last month auditor-general Kimi Makwetu took issue with the Ingonyama Trust board for failing to provide supporting documents to account for land to the value of R1.08bn.

Board chairman Judge Jerome Ngwenya said they were not aware of any case against trust‚ but would appose it.