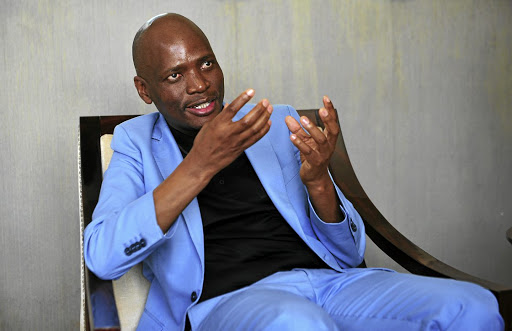 Former SABC chief operating officer (COO) Hlaudi Motsoeneng has hit back at the public broadcaster, describing its new leadership as "clueless and obsessed with blaming" him for the current financial crisis.

Motsoeneng, who is embroiled in legal disputes with the SABC over the payment of his pension, told Sowetan yesterday the retrenchments facing more than 2000 SABC workers were avoidable.

Speaking from his Krugersdorp home, Motsoeneng accused the new leadership of misleading the public by claiming that they were earning less than those during his tenure.

Last week, the new SABC leadership laid bare figures relating to the remuneration of all employees, including the executives. The SABC said the package paid to former group CEO James Aguma was R7.2m "if you take into consideration payment in lieu of the premature termination of the contract of employment".

But Motsoeneng said this was a conflation of issues by bringing Aguma's separation settlement as if it was part of his package.

The broadcaster also indicated that Motsoeneng was earning R3.8m if a "R11m bonus" was excluded, while the previous CFO earned R4.1m.

Motsoeneng said this information was misleading.

Top 3 executives at SABC earn packages of more than R12m

Minister of communication Nomvula Mokonyane revealed on Thursday that the total cost to company of the top three executives at the SABC was R12.1m.
News
2 years ago

"Because here we're talking about entrance level (sic), my total package when I was appointed as COO was R3.8m, the former GCEO was R4.6m, former CFO was R3m... the current GCEO is getting R5.1m. The current COO is getting R4m-plus per annum, I was getting R3.8m so the information is misleading."

Motsoeneng said there was an "obsession" with him being labelled the source of the current dire financial situation at the public broadcaster.

"The SABC was performing under our leadership, nobody was retrenched..." He said even if the 2000 employees were retrenched the SABC would still fail to turn the corner.

Motsoeneng laughed off the new leadership's move aimed at recouping R60m from employees who were unduly appointed and promoted during his tenure.

SABC spokesperson Neo Momodu said: "The SABC would like to make it clear that Motsoeneng was the central figure in the complete financial and governance collapse of the corporation which the current executive is redressing."

She said the current SABC board and management has inherited over R5.5bn in irregular expenditure from Motsoeneng's period on the executive. "We are approaching the Labour Court to overturn irregular appointments made during his time at the SABC, which have cost the SABC a minimum of R60-million. His arbitrary and reckless 90/10 policy cost the SABC nearly R300-million in the year it was implemented."

Former SABC chief operating officer Hlaudi Motsoeneng should not be reinstated because he doesn't have the required qualifications.
News
2 years ago
Next Article