Tumi qualified as a pilot and her story is an inspiration 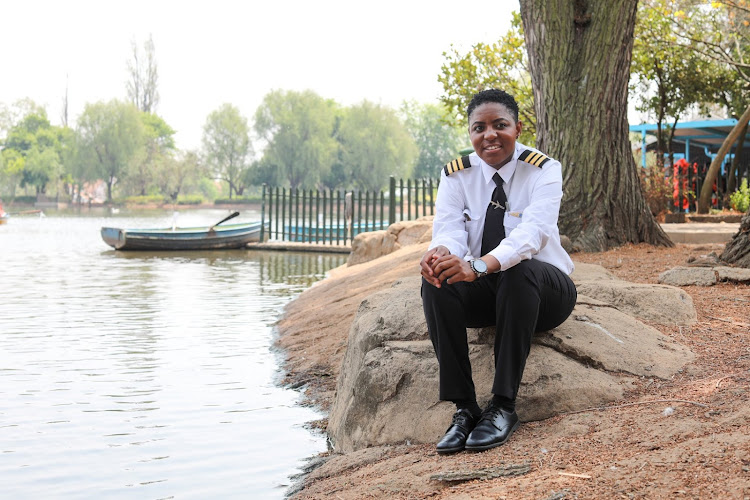 South African pilot Tumi Katisi was trending on Friday after the heart-warming tale of her determination to make it through flight school went viral on social media.

Katisi's story was documented by Humans of New York‚ a photoblog with more than 20 million followers that provides a glimpse into the lives of strangers. Founder Brandon Stanton recently came to South Africa to tell people’s stories.

In hers‚ Katisi described how‚ out of desperation‚ she reached out for help to fund her studies but many doors closed in her face.

“In tenth grade we were given an assignment to shadow a professional in the workplace. I wanted to be a doctor at the time‚ so I emailed some hospitals but never got a response‚” the story began.

Instead‚ she ended up spending time with an aunt at the airport.

“I noticed all the pilots had incredible posture. All their hats were lined up on a shelf. Their jackets were all hanging in a row. And that’s when the bug bit me.”

Read the full post by Humans of New York here:

(1/2) “In tenth grade we were given an assignment to shadow a professional in the workplace. I wanted to be a doctor at...

Posted by Humans of New York on Thursday, 1 November 2018

When she turned 18 she picked up an application form to join a flight school but her mother said it cost too much and encouraged her to apply to universities instead.

“She’d bring me applications‚ but I kept hiding them under my bed and telling her I got rejected. I found an internship with a glider company and used my stipend to buy my first pilot’s uniform.”

And that’s when her mother realised Katisi was deadly serious about flying.

“Mom tried her best to pay for flight school‚ but we kept running out of money.”

At once stage Katisi cut adverts out of magazines and newspapers and made a note of every brand in the pantry at home. “I sent all of them letters‚ asking for help. Almost everyone said 'no'.

"But I did receive an amount from a grocery store called Pick n Pay. And Breitling sent me a brand new watch to raffle. That was a huge break. I sold six hundred raffle tickets. Things were going so well. African Pilot magazine promoted the raffle for free.

“A man from Australia bought 100 tickets. But then I got a letter from the Lottery Board ordering me to end my raffle. They said it was illegal. I tried to explain that I was raising money for my education‚ but they didn’t care. I was so disappointed. I’d have to sit out another year of flight school‚" Katisi said.

After this major setback‚ Katisi contacted the people who had bought their tickets and informed them of the lottery's stance on her raffle so she could return their money.

"Nobody would accept their money back. They told me to keep it! It was enough to keep me in the air for months‚" Katisi said.

Later that year‚ her mentor invited her for lunch at the airport.

"When I stepped out of the car‚ everyone who had ever helped me was there. They all started clapping. And somebody handed me the phone. A person on the other end said: ‘You’re live on 94.7 [radio] and we’re going to pay for your entire education’.”

That set Katisi on a path to reaching her flying dreams.

"That was nearly four years ago. I just got my licence last week‚" she said.

Although her dream is to fly for national carrier‚ she said she first wanted to do some teaching.

"I want to visit schools in black neighborhoods. I want all the kids to see what an African female pilot looks like‚" Katisi said.

By the afternoon‚ Katisi’s story had been shared thousands of times on social media.

"You're the reason why I didn't give up‚" Phumelele Nxele wrote on Katisi's Facebook wall.

"There’s always light at the end of a tunnel ... Keep inspiring other young girls and show them that it is possible if you believe. Wish you all the best for the future‚" wrote Zanele Nosisa Vayeke.

Katisi took to her own Facebook page to say she was overwhelmed by the effect her story has had.

"‪Thank you @humansofny for sharing my story. Thank you to everyone out there reading it and sending me love. Keep chasing your dreams‚ they really do come true!”