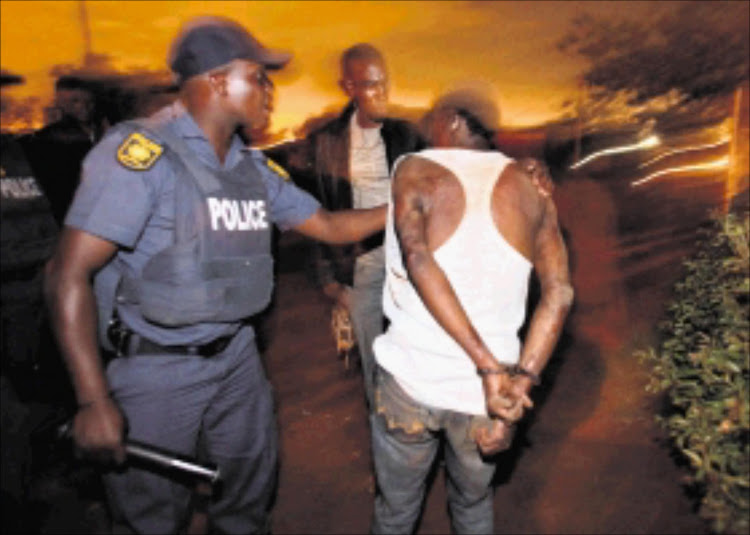 MPs have said migration is among the causes of high crime.
Image: Sunday Times.

Police representatives of the five most dangerous precincts in the country were grilled in Parliament on Tuesday. The Portfolio Committee on Police summoned the station commanders in what turned out to be a back and forth session of criticisms over who is to blame for the high violent crime rates in Hillbrow‚ Johannesburg Central‚ Kagiso‚ Mitchells Plain‚ and Nyanga.

SAPS representatives delivered a presentation on the five precincts. There has been an increase in murder in all of them‚ with minor shifts in other categories of contact crime.

The police blamed foreign nationals‚ unemployment‚ and gang activity for being the main impediments to reducing crime in the precincts.

Most robberies are inside jobs‚ says Gauteng safety MEC

The majority of armed robberies and burglaries are the result of inside jobs.
News
3 years ago

A spokesperson for the Nyanga police station criticised the national representatives of SAPS for pushing blame onto the station. He cited a lack of resources and no proper national review by SAPS of the conditions under which people live for the failure to lower crime rates.

The SAPS presentation had a list called the Five Pillars‚ which actually listed six priorities for reducing crime: Intelligence gathering‚ pro-active approach‚ combat approach‚ reactive through detection approach‚ community policing‚ communication and liaison. None of these were properly explained.

MPs followed the presentation with questions that turned into a barrage of criticisms of SAPS.

Committee members condemned the fact that the five precincts have held their positions as the highest violent crime rate precincts for most of recent history. By focusing on the five precincts in question‚ one MP argued‚ change in precincts with slightly lower crime‚ such as Umlazi‚ was not occuring.

MPs chastised SAPS for failing to fight police corruption or address mediocre police performance. The committee also focussed on statistics showing that in some precincts many employed officers are not reporting for duty‚ whether on sick leave or for family obligations or other reasons. In Mitchells Plain‚ only 79% of officers are currently reporting for duty.

MP Dianne Kohler Barnard (DA) said that while there are funds allocated for informants‚ there was no mention at any point of any informants being used. She suggested that the precincts may be committing fraud. Another MP pointed out that 76 bulletproof vests were reported missing from Johannesburg Central.

"Dealing effectively with the root causes of contact crime is not only a police matter‚ but involves other spheres of government and civil society‚" ...
News
3 years ago

The meeting became heated when immigration was discussed. Representative Ahmed Munzoor Shaik Emam (NFP) delivered a diatribe over how some suburbs of the Western Cape are entirely occupied by foreign nationals‚ and how South Africa is not meant to host so many immigrants.

The response by the committee wrapped up with a long address by MP Livhuhani Mabija (ANC)‚ who had previously kept quiet. Mabija‚ speaking more to the entire room of people rather than the SAPS representatives‚ gave an emotional plea calling for the country to be saved. She argued that the root of the issue is not a lack of performance‚ but self-interest and money. “If all political parties don’t stop fighting for power‚” she said‚ “we cannot stop the criminals. We fail to love poor people. We fail to love one another.”

Mabija defended the SAPS representatives: “We expect the poor men and women in blue to care for all this rubbish … if we don’t change the mindset of the masses‚ we won’t win.”

Representatives from SAPS‚ with much less enthusiasm than before the questioning by the committee‚ responded morosely to the criticisms. They said they felt unfairly blamed for issues that were not theirs alone to address.

Cele laughed at the committee’s criticisms‚ claiming that the SAPS mission is impossible because “the conditions [of the precincts] will never change”.

“SAPS mandate is overstretched and impossible to fill‚” said Sitole.

Sitole also argued that the true solution was not increased police enforcement‚ but “overall change of human life”.

The meeting then ended.

The only resolution from the meeting was that all vacancies in these five precincts be filled by December. MP Zakhele Mbele (DA) said there would be follow-up meetings next year to assess whether the resolution has been implemented.