Why Gigaba owned up to viral sexting video 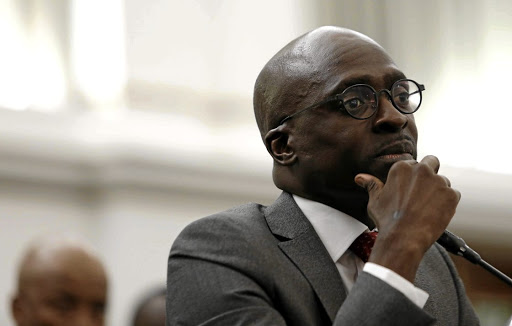 Home affairs minister Malusi Gigaba yesterday chose to apologise for his sexting video after he was blackmailed to pay R5m or be humiliated.

The last demand to Gigaba was made on Saturday, according to sources. Gigaba released a statement and made a public apology after he was for the first time sent the video of himself in a compromising position.

He said the "video was stolen when my communication got illegally intercepted".

Yesterday, in another video circulated, Gigaba, flanked by his wife Noma, appeared to be speaking at a church service where he thanked congregants for their prayers.

" ...leaders are imperfect, we are human ... Moses was not ... David was not, he committed a sin himself when he was asked about he said whoever did this must be killed ..." Gigaba said to applause.

He apologised "for the pain and embarrassment the likely wider distribution of this private material will cause".

It was the first time in over a year of threats that the blackmailers sent Gigaba the video.

Malusi Gigaba has made good on his threat of legal action against journalist-turned-author Redi Tlhabi.
News
3 years ago

The minister then decided to come out and admit to making the video.

"All along in all these approaches, nobody had ever produced a physical copy of the video.

"They would always speak about it and describe what it contained therein," Mkhize said.

Gigaba claimed his blackmailers had been demanding cash ranging from R1m, R5m to R10m.

"At some point it became a demand that he [as then minister of finance] unlock contracts that would deliver a net profit of at least R20m," Mkhize said.

He said through the help of private investigators, Gigaba managed to track down two separate suspects who subsequently apologised for their roles in the matter.

"However, they were not particularly helpful on where they had sourced the material . the people couldn't produce the video and account for how they became aware of the contents of the said video," he said.

Yesterday social media went into a frenzy with the 14-second video being widely circulated.

This is not the first time Gigaba has faced public humiliation relating to his sex life.

In 2015 a bitter break-up with his then mistress Buhle Mkhize was played out in public, with Noma involved in a social media spat with Mkhize. At some point, Mkhize threatened to release messages Gigaba had sent her and post his naked video.

South Africa’s minister of home affairs Malusi Gigaba has been trending all weekend after a sex tape was leaked to the public on October 28 2018.

Home affairs minister Malusi Gigaba revealed on Sunday that a video of a sexual nature was stolen when his phone got hacked during 2016 and 2017 and ...
News
3 years ago
Next Article