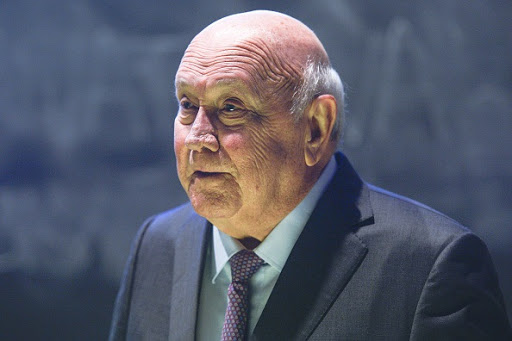 The FW de Klerk Foundation said on Saturday De Klerk was being treated at the Panorama Hospital in Cape Town for a condition known as pneumothorax - which is an abnormal collection of air in the pleural space between the lung and the chest wall.

“He underwent a successful procedure this morning (Saturday) and it is expected that he will be discharged from hospital some time next week‚” the foundation said.

In his statement‚ Mandela said he wished De Klerk strength and trusted that he was receiving the best medical treatment.

Mandela‚ who is also a member of the Pan African Parliament‚ said De Klerk recently paid a glowing tribute to his late grandfather‚ former president Nelson Mandela‚ on the occasion of the Nelson Mandela Centennial Celebration at Mvezo‚ on July 18 this year.

“His words moved many to tears and his deep regard for the Father of the Nation was evident and palpable. He described Madiba as a man of principle and an extraordinary statesman and servant of the people‚” Mandela said.

Mandela said De Klerk described his relationship with Madiba in the years after their retirement and recalled how Madiba would call him and enquire about his health and wellbeing.

“We hold him in our hearts and pray that God grants him a full and speedy recovery.”