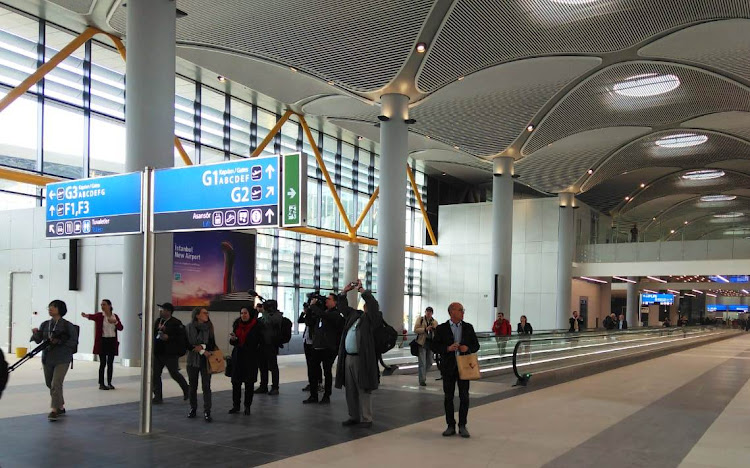 Journalists from around the world inspect Istanbul New Airport before its opening on Monday.
Image: Philani Nombembe

Not even the recent death of journalist Jamal Khashoggi in the Saudi Arabian consulate in Istanbul could eclipse preparations this week for Monday's unveiling of Turkey’s new airport‚ one of the world’s biggest.

Istanbul New Airport — its temporary name — is expected to become a familiar place for South Africans either taking advantage of the rand’s strength against the lira or connecting to other destinations.

Turkish Airlines‚ which operates daily flights to Istanbul from Johannesburg and Cape Town and four flights a week from Durban‚ is the principal tenant and will take up to 70% of the airport’s capacity.

“It is one of few popular destinations outside of Africa where an SA passport offers efficiency and value [free visas] compared to some other ‘first world’ passports.

How the electronics ban on flights will affect SA travellers

South Africans who are booked on flights to the United States via Dubai or one of the US’s other “high risk” cities from this Saturday until ...
Good Life
5 years ago

“Istanbul is a competitive advantage for Turkish Airlines‚ as for South Africans it is considered a desirable place for a stopover‚ business connection hub‚ or as a holiday destination‚ especially when compared to rival hubs like Dubai‚ Abu Dhabi‚ Qatar and Addis Ababa.”

As the diplomatic impasse raged on this week over the death of Khashoggi‚ a 60-year-old Saudi Arabian‚ Turkey winged ahead with its preparations to launch its 76.5 million square metre international airport 35km north-west of Istanbul on its European side.

With a capacity of 2‚000 flights a day and 90 million passengers a year – set to increase to 200 million – the Turkish government believes it will give the likes of Heathrow‚ Schiphol and Frankfurt a run for their money as an international hub.

The airport is being built by iGA‚ which will run it for next 25 years. On Thusday‚ CEO Kadri Samsunlu hosted journalists from across the world at the completed first phase — two runways and a terminal. “Istanbul New Airport‚ the largest infrastructure in the history of the republic‚ is now 97% complete and it will break new ground in many fields with its technology‚ design and passenger experience‚” said Samsunlu.

“The shift towards the Asia-Pacific region not only in travel but also in commerce will make Istanbul New Airport a strong player in cargo transportation business too.”

Samsulu said the airport’s design was inspired by Turkish-Islamic arts and architecture.