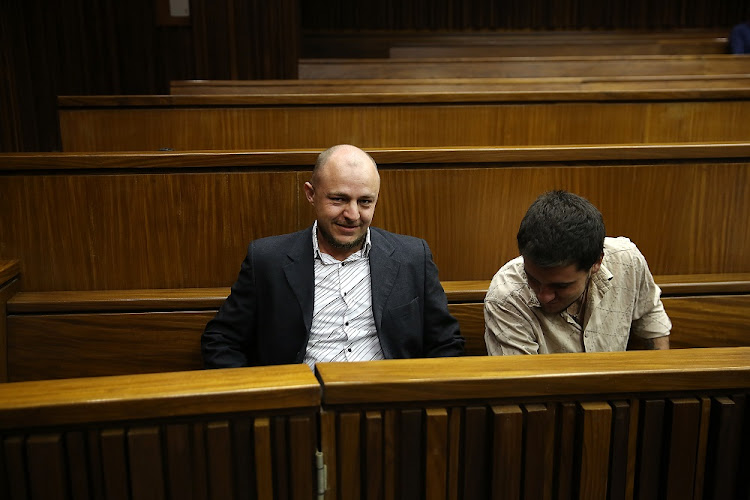 Zac Valentine, Le Roux Steyn (Pictured) are part of a group of six people accused of carrying out 11 vicious murders‚ are seen in the High Court in Johannesburg.
Image: ALON SKUY

One of the men accused of an 11-person murder spree in Krugersdorp faked his own death and got a co-accused to submit a fake insurance policy‚ the South Gauteng High Court heard on Friday.

Zac Valentine‚ 33‚ and two others - Cecilia Steyn‚ 37‚ and Marcel Steyn‚ 20 - are accused of murdering 11 people from 2012 to 2016. They also face charges of robbery‚ aggravated assault‚ racketeering‚ possession of an unlicensed firearm‚ fraud and identity theft. They pleaded not guilty to 32 counts.

Earlier this year former high school teacher Marinda Steyn‚ 51‚ was sentenced to 11 life terms for the Krugersdorp murder spree. Her son‚ Le Roux Steyn‚ is serving an effective 25-year prison term and has testified against the three remaining accused. Marcel is her daughter.

Sean Shadzkelowitz‚ a claims specialist manager at Discovery Life‚ told the court that Valentine was a former employee at the company. As an employee‚ he was entitled to a benefit known as the risk group cover.

"When you resign‚ you leave the scheme‚ but you take it on a personal capacity‚" he said.

He said Valentine chose to continue with the scheme when he resigned in July 2015. In August‚ the company extended Valentine's policy.

"We received a premium on the collection date. However‚ October‚ November and December debit orders failed‚” Shadzkelowitz said.

He said the company received a payment of R1‚750 from Cecilia Steyn's Capitec account just before the policy lapsed.

"The payment was directed at bringing the policy up to date."

The court heard that Cecilia submitted a death claim at Discovery Life as the beneficiary.

In the form‚ she stated that Valentine had died on December 16 2015 in an accident and that the car was burnt.

"The beneficiary furnished us with her banking details for payment of the proceeds of the claim‚" Shadzkelowitz said.

As is company procedure‚ Cecilia had to submit a death certificate from the department of home affairs to prove Valentine's death‚ Shadzkelowitz said.

Valentine's fingerprints could not be obtained because it was claimed that he had been burnt in the accident.

Shadzkelowitz said his assessors told him of their suspicions about the claim and he started investigating.

"I decided to interview the beneficiaries when I heard from the investigating officer of the accident that they were investigating the identity of the person who was found in Valentine's car."

He said he interviewed Cecilia at her flat in Krugersdorp.

"During the interview‚ I realised that she was not being honest. She said that the deceased's wedding band was found at the scene and I found that this was not true."

He said Cecilia had also lied about the circumstances of the death of Valentine's wife‚ Mikeila. She claimed Mikeila was killed by Zimbabweans and they had been deported.

In an audio recording played in court‚ Le Roux and Cecilia can be heard crying in a telephone call to a Discovery Life employee when they logged a claim for Valentine's death.

A video clip of an interview Shadzkelowitz had with Cecilia was also played in court. In it‚ Cecilia claims she had been Valentine's beneficiary long before he got married.

Earlier‚ Linda le Roux‚ a former employee at Die Herberg Hotel in Krugersdorp‚ told the court that Valentine had stayed at the hotel for four months. The period includes the time when he had died in the car accident.

She said Valentine had booked in under the name Jacque and had stayed at the hotel alone. "He booked in on December 15 2015. It was a Tuesday."

Valentine would extend his stay and whenever he left the hotel he would always wear a hooded top. "He never went out without his hoodie‚" Le Roux said.

The case continues on Monday.