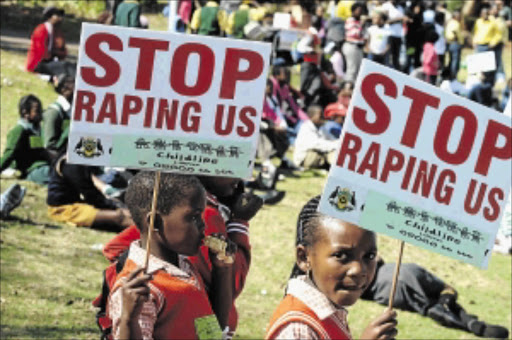 The family of the 13-year-old Mpumalanga girl who was raped by her uncle and her aunt's boyfriend has condemned what happened to her and the abortion which followed the rape.

The family released a statement yesterday condemning the ordeal that the girl had suffered even with the knowledge of people close to her.

"The family equally condemns the manner in which an abortion was subsequently conducted on the young relative.

This happened without the knowledge of the biological parents of the 13-year-old, the family has established," the family spokesman said yesterday.

"We welcome the swift arrest of the alleged perpetrator.

"If there are any family members who aided this dastardly act or defeated the ends of justice, the law must take its course.

"We have taken a decision that as the family we will be providing no legal or financial assistance to the parties implicated. That is how outraged we are.

"We are related to the parties maternally and expect the paternal family to stand up and address this.

"To the extent that we have a daughter married into that family where this occurred, we had to make our stance clear on this: we say no to rape and to child abuse."

Sowetan reported about the girl's rape and abortion horror earlier this week.

The girl's ordeal only ended at the weekend when her uncle was arrested.

It was also reported that the girl's grandmother - who lived with her, the
alleged rapist and other relatives - knew about her suffering but did not report it to the police.

The alleged rapist, a 32-year-old man, appeared in the Kabokweni magistrate's court on Tuesday and the matter was postponed to next month.

The girl told Sowetan that it all started in May when the man forced himself on her, on the couch, while her grandmother was away. However, this was seen by other children in the house.

She said she was raped several times after the first incident. The man then told the girl that he was taking pills as he was HIV positive. Things got even worse when her aunt's boyfriend also started raping her.

The girl's father has called for his own mother, sister and his brother-in-law to also be arrested.