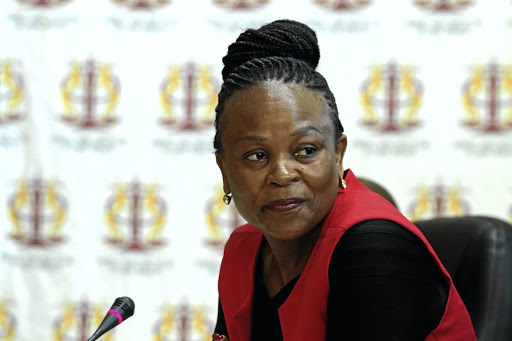 This was one of the accusations levelled against Mkhwebane in the North Gauteng High Court in Pretoria where the DA and the Centre for the Advancement of the South African Constitution (Casac) are challenging her report on the scandal.

Casac lawyer Michelle le Roux told the court Mkhwebane wrote to Magashule about the allegations and when he replied that he would investigate those implicated; she simply accepted it and never questioned his role.

Mkhwebane attended the court proceedings briefly in the morning yesterday but left later.

She stands accused of ignoring the work done by her predecessor Thuli Madonsela and failing to ask the difficult questions in her investigation of the failed dairy farm project.

The DA and Casac lawyers poked holes in Mkhwebane's report which was released in February, arguing she watered down the provisional report which Madonsela had done in getting to the truth on the project to uplift poor farmers.

More than R220m was allegedly poured into the Vrede dairy farm project with only R2m spent on the actual farm.

There is no explanation as to why she changed that recommendation

The project was in partnership with Gupta-linked company Estina.

The DA and Casac cases are being heard at the same time in court as the two organisation want Mkhwebane's report into the Vrede dairy farm project to be set aside.

Le Roux told the court it was Mkhwebane's duty to be vigorous in her investigations and to keep an open mind in order to get to the truth on an initiative which was supposed to benefit the poor.

She accused Mkhwebane of being obsessed with processes and systems but not getting to the truth of what happened.

Public protector Busisiwe Mkhwebane  ignored a lot of evidence in her investigation of the Vrede dairy farm project, the DA has argued in the North ...
News
3 years ago

"The original report [compiled by Madonsela] asked for particular individuals to face disciplinary actions but those recommendations did not make it to the final report," she said. "There is no explanation as to why she changed that recommendation .

In her report, Mkhwebane found among others that payments to Estina were not done according to Treasury regulations and the agreement between the Free State agriculture department and Estina was invalid.

The DA wants the report set aside as it also has no indication on the role played by Magashule and then MEC of agriculture Mosebenzi Zwane.

DA lawyer Janice Bleazard also accused Mkhwebane of failing in her duties by ignoring the contents of a report by National Treasury on the controversial farming project.