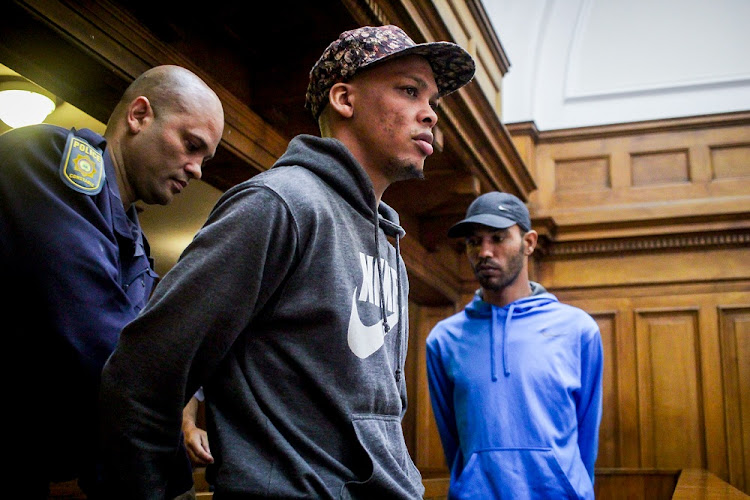 Two of the four men accused of the murder of Hannah Cornelius’, Geraldo Parsons (colourful cap) and Vernon Witbooi ( blue hoodie ) during an appearance at the Western Cape high court on October 9 2018.
Image: Anthony Molyneaux

The man who has been portrayed as the ringleader of the gang accused of kidnapping‚ raping and murdering Hannah Cornelius is due to give evidence in the high court in Cape Town on Wednesday.

Geraldo Parsons‚ who is on trial with three others for the murder of the Stellenbosch University student‚ is the second man to present his defence‚ and the trial is expected to conclude within days.

On Tuesday‚ fellow defendant Eben van Niekerk testified in a trial within a trial in which the court agreed to admit as evidence a letter he wrote to Hannah’s parents to say sorry for what happened to their daughter in May 2017.

The letter did not reach them‚ and Van Niekerk‚ 28‚ told the court he wrote it only because he thought it would help his case.

The top of a cold drink bottle could spill crucial evidence in the murder trial of Stellenbosch student Hannah Cornelius.
News
3 years ago

Van Niekerk‚ who left school after Grade 7‚ wrote in Afrikaans: “This letter comes from Eben V.N.K. With this I write the letter to Henna’s mommy and daddy. I am sorry for what I did. I ask if you can forgive me for what I did. I wanted to help but I can’t because the way it was would have seen it. The girl was like a friend to me but the other accused I was also scared of and it wasn’t nice to see it and I was also afraid of them. Don’t be angry at me please.”

Prosecutor Lenro Badenhorst asked Van Niekerk why he would write a letter apologising to the parents of a person he had not raped‚ robbed or murdered.

Van Niekerk responded that he did it because because he “just wanted to get rid of the letter”‚ which police suggested he write‚ and he signed it because a detective asked him to.