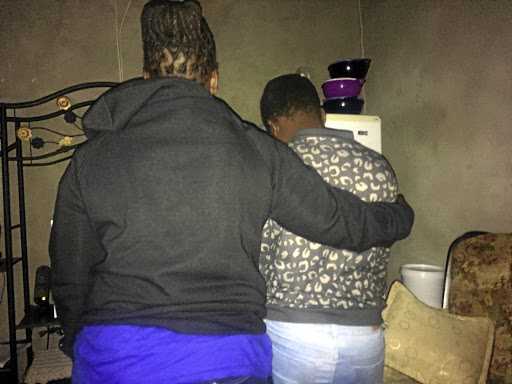 A 13-year-old rape victim is comforted by her mother at their KaNyamazane home in Mbombela, Mpumalanga. / Mandla Khoza

A 13-year-old girl's horror of being repeatedly raped, which resulted in pregnancy, finally came to an end at the weekend when her uncle was arrested.

It has also emerged that the girl's grandmother - who lived with her, the alleged rapist and other relatives - apparently knew about her ordeal but did not report it to the police.

The man, 32, appeared in the KaBokweni magistrate's court in Mpumalanga yesterday and the matter was postponed to next month.

The girl told Sowetan that it all began in May when the man forced himself on her, on the couch, while her grandmother was away, but this was seen by other children in the house.

"One day the younger kids were telling my grandmother what they saw happening to me on the couch and she told them to shut up and never to talk about it again."

The girl said her situation became worse when her aunt's boyfriend also started raping her too.

The girl's father was furious yesterday and called for his mother, sister and his brother-in-law to be arrested as well.

The Cape Times reported on Wednesday that one of its reporters had been charged with raping a 7-year-old.
News
3 years ago

The father from KaNyamazane outside Mbombela, who cannot be named to protect the identify of the victim, said he sent the child to live with his mother three years ago after he broke up with her mother. "I feed these people in the house, all of them, but they raped my daughter.

"What makes me more insane is that my mother knew and also helped to abort the pregnancy without even telling me [what happened].

"I want the police to arrest all of them, my mother and sister for helping the child abort the pregnancy and also my brother-in-law, who is said to have raped my daughter too.

"I'm not well, I can't even eat or sleep at night. How can your own family kill your [unborn] grandchild alive?"

The alleged rapist appeared on rape charges in court yesterday but was not asked to plead on a rape charge.

His case was postponed to next month for further investigation and for him to brief his lawyer.

"For now we have arrested one person. We now got to hear the allegations that the brother-in-law also raped the victim. Let us assure everyone that we will leave no stone unturned on this case. As for defeating the ends of justice by the grandmother and aunt, we are on to them too," he said.

Hlathi said they were also waiting for DNA test results.

Meanwhile, the 13-year-old's mother told Sowetan that the truth came out after the girl's stepmother called her to fit clothes she had bought for her.

"They first did not allow the child to visit me during the September school holidays. I think they feared the pregnancy would be seen because they say it was over two months.

"Her stepmother called her on Saturday to fit clothes, and as she was suspicious she asked her to do a pregnancy test. The girl told her the pregnancy had been aborted and the foetus thrown at the dumping site."

She said the girl's stepmother alerted the police. "I was called and told what had happened," she said.

The girl said the pregnancy was aborted on Friday night after her grandmother and aunt gave her pills to drink.

She said her grandmother told her to put the foetus in a plastic bag and she dumped it on Saturday morning.