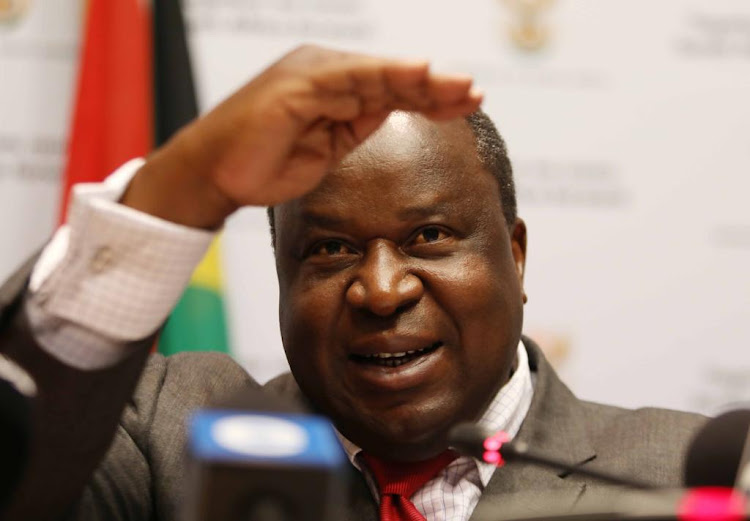 Mboweni made the remarks at a media briefing he hosted in parliament ahead of the presentation of his Medium Term Budget Policy Statement on Wednesday.

Mboweni said if asked‚ he would advise Ramaphosa that it simply made no "financial and political sense" to have a cabinet of 35 ministers‚ with each one of them having a deputy - while some even have two people deputising for them.

"If he asked me about the size of the cabinet‚ I would say preferably not more than 25…probably 20 is more than ideal‚" said Mboweni.

"China is a big economy and I think they have about 25 ministers or something like that. We have no economically‚ financially and politically understandable reason that you can have an executive that's up to 70 people – that's what I would say to him."

‘Don’t tell the establishment about this tweet!!’
Business
3 years ago

He called on government departments to be strict in their management of overtime payments‚ promotions and improvement of other conditions of service.

"Over time‚ wages have crowded out other goods and services and capital investment‚ particularly in health‚ education and defence. In some cases‚ this has contributed to a build-up of unpaid invoices in provincial departments‚" said Mboweni in his speech.

"Around 85% of the increase in the wage bill is due to higher wages‚ rather than headcount increases."

Mboweni's MTBPS shows that the national treasury has not set aside any money to finance a public sector increase for 2019.

Mboweni said ministers also needed to play their part in reducing the cost of running the state‚ saying they would have to reduce their office benefits.

His remarks come as Ramaphosa is currently considering the size and shape of government departments and ministries‚ which the president announced in his state of the nation address in February.

A minister earns an average annual salary of R2.4-million‚ with their deputies earning R1.9-million. The ministerial handbook allows ministers to hire at least 10 staff members in their private offices but this stipulation is often exceeded.

"When we go to those negotiations and so on‚ the ministers as well have to demonstrate that they are walking the talk. The numbers of advisors and so on that they accumulate around themselves‚ the staff complements. Once a minister comes into office they change their staff….

“We have to demonstrate some restraint ourselves‚ the cars we drive for example. In the first government of national unity in 1994‚ we introduced what was called a six pack‚ a package of measures that we called belt-tightening. Maybe we also need that for members of the executive‚ but that's the president's issue. But we have to demonstrate something tangible . . .”

VAT on sanitary pads is scrapped

In a victory for the plight of poor and mostly rural young women‚ government has resolved to abolish the payment of Value-Added Tax on sanitary pads.
News
3 years ago

Mboweni's MTBPS also shows that‚ despite a weak economic environment and dwindling tax revenue‚ government spending would continue to rise in the next three years.

The MTBPS documents tabled in parliament indicate that government would spend R5.9-billion in the next three years.

Of this‚ Mboweni said R3.3-billion would be allocated to education‚ health‚ the provision of water and electricity as well as social grants in the three years ahead.

The increased public expenditure‚ coupled with a declining revenue collection‚ will see government borrowing more to finance some of its policy priorities.

This means government's annual debt service costs will rise from R162-billion this year‚ to R221-billion by 2021.

He also said public infrastructure spending was projected to peak at a more than R855-billion in the same period‚ with state-owned companies accounting for R370-billion.