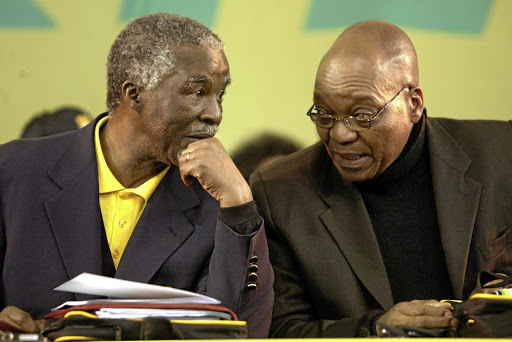 Former president Thabo Mbeki never wanted Jacob Zuma as his deputy when he took over from Nelson Mandela in 1999.

According to one of Mbeki's advisors at the time, the then incoming president believed that Zuma lacked capacity and that his leadership would result in corruption being institutionalised in government and the ANC.

These revelations are contained in a new book by former ANC and government intelligence chief Vusi Mavimbela.

The book titled Time is Not the Measure is set to be released this week.

In it Mavimbela documents his life story, including his work in the ANC.

Although it is widely known that Mbeki at one stage considered IFP leader Mangosuthu Buthelezi as his deputy in a deal that would have given the ANC control over the then IFP-run KwaZulu-Natal, it has never been revealed why he was so reluctant to choose Zuma.

In the book Mavimbela says Mbeki told him, just before his 1999 inauguration as president, that he was uncomfortable with having Zuma as his deputy.

"He felt Zuma lacked capacity. But he needed a good reason not to appoint Zuma.

"Thabo Mbeki said to me that under Zuma's leadership, corruption would be institutionalised and become normal in government and the ANC," Mavimbela writes.

Mavimbela also reveals earlier attempts by himself and other ANC leaders to find an alternative deputy for Mbeki.

He says this led to Zuma complaining to Lindiwe Sisulu, now international relations and cooperation minister, that Mbeki's inner circle didn't want him as deputy president of the country.

Former president Jacob Zuma fired his first director-general, Vusi Mavimbela, out of suspicions that he was then human settlements minister Tokyo ...
News
3 years ago

Mavimbela relates how a meeting was called to discuss Mbeki's possible deputy.

"In my discussion with Nhlanhla and Essop Pahad, we envisaged the difficulty of involving Zuma in such a discussion.

"It was only human for him to consider himself a strong candidate as Mbeki's deputy in government."

Mavimbela says they did not want Zuma to learn through the grapevine that an advisory meeting had taken place from which he was excluded.

A day after a briefing with Mbeki at the Union Buildings, he saw Sisulu who whispered to him that Zuma had told her they did not want him to be deputy president, especially Mavimbela and Netshitenzhe.

"I thought we were all expressing our unbiased views in the interests of assisting comrade Thabo. It is a pity if that is how Zuma looks at it," Mavimbela told Sisulu.

Mavimbela says the feedback from Sisulu made him realise the follow-up meeting should not take place and Nhlanhla and Pahad agreed when he informed them.