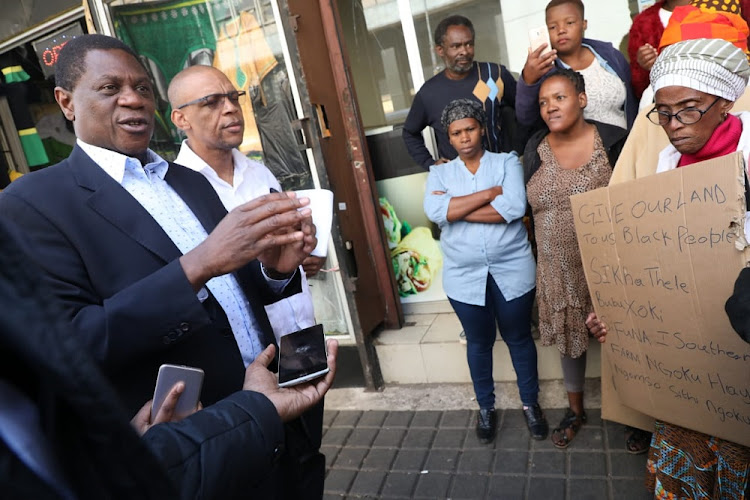 Residents demanding to get serviced stands in Johannesburg have threatened to sleep outside ANC headquarters Luthuli House if the ruling party does not heed to their call.

On Monday, members of the  Gauteng Civics Organisation picketed outside Luthuli House demanding that government release serviced stands they say were promised to the people.

About 17 people briefly spoke to ANC treasurer-general Paul Mashatile, who committed to resolving the issue. Mashatile was accompanied by ANC spokesperson Pule Mabe.

Leading the picket, Thabang Makhele warned Mabe that more people would come to sleep outside Luthuli House if the demands were not met.

“If your office is not going to intervene, next week Sunday night there will be mattresses outside here. Mothers will come and sleep here. When the president comes to the NEC [national executive committee] meeting on Monday morning, women will be bathing outside here. Don’t be fooled by this number [of people who have attended]. This is a picket. We will bring the nation here…We want you to help us,” said Makhele.

He said the group represents residents from Lehae, Freedom Park, Motsoaledi, Eldorado Park, Vlakfontein and Diepkloof who are supposed to benefit from Southern Farm, a piece land in the southern part of Johannesburg that was supposed to yield 48 000 serviced stands.

“We have been engaging with then [human settlements] MEC [Paul] 'Spokes' Mashatile. We have also engaged with then MEC [Jacob] Mamabolo regarding the question of land rapid release. There was a promise that there was land that was identified, which belongs to the municipality. The land is not far from Southgate [mall]. It is called the Southern Farm. It is next to Eikenhof. Planning was done and 48 000 stands were to be allocated to our people. The clear demand is that our people are no longer interested in receiving RDP houses. They just want a piece of land so that they can be able to develop their own houses. All they want from the government is for it to put water, sewer pipes and road infrastructure,” said Makhele.

Mashatile informed the residents that the ANC had spoken to Gauteng premier David Makhura and he was ready to meet them at the ANC offices immediately.