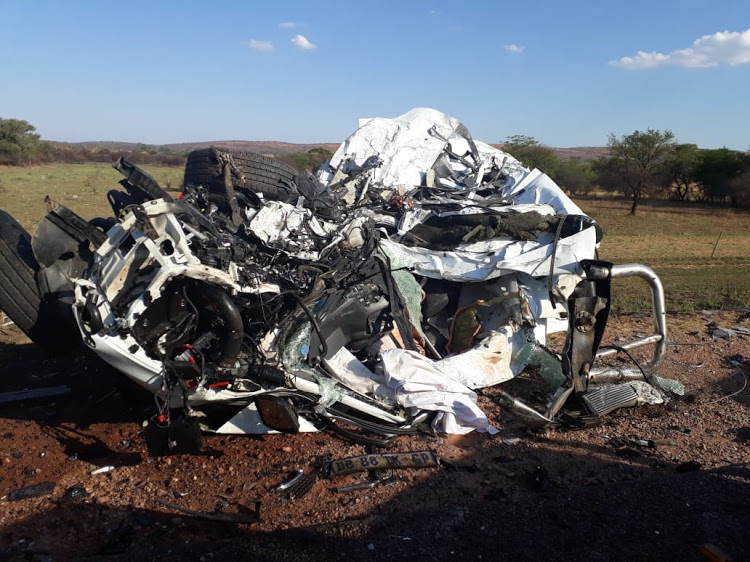 More than 20 people were killed in a horrific accident between Kranskop and Modimolle in Limpopo
Image: SAPS

The Road Traffic Management Corporation has warned transport operators that they could face severe consequences including criminal charges if they continue to ignore duties imposed on them by transport regulations.

The warning comes in the wake of a horrific multiple vehicle accident on the N1 between Kranskop and Modimolle in Limpopo in Friday afternoon which claimed 27 lives and left several people injured.

It is believed that a truck went out of control and crashed into a minibus and three other vehicles travelling in the opposite direction.

According to the RTMC‚ an estimated 91 people have died while 275 have been injured in major collisions involving trucks and buses throughout the country since the beginning of the year.

It said regulations impose duties on the operators to exercise control over their vehicles and drivers while on public roads.

More than 20 people were killed in a horrific accident between Kranskop and Modimolle in Limpopo in Friday afternoon.
News
3 years ago

“This includes the responsibility to ensure that vehicles are in a roadworthy state and drivers are fit and proper to operate those vehicles.

“Failure to execute these responsibilities could result in the cancellation of operator permits with severe consequences for businesses concerned. Vehicles can also be impounded and prevented from continuing their journeys until all defects have been repaired.

Criminal charges could be imposed where fatal crashes are involved‚” the agency warned. It said failing to keep vehicles under control‚ driving in the face of coming traffic‚ driving at excessive speed and failing to keep a proper lookout had been identified as some of the human factors that contributed to the majority of these crashes. Mechanical failures and road conditions contributed to a very small number of the crashes.