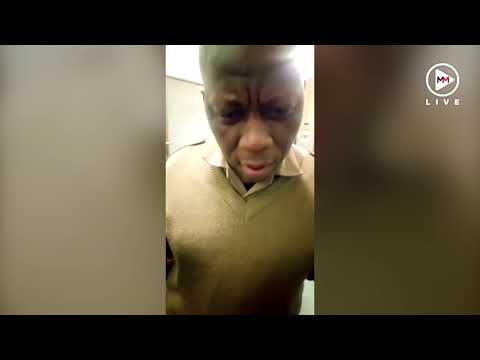 A video circulating on social media shows what looks like a prison official drunk while on duty. DCS spokesperson Singabakho Nxumalo said the department was aware of the video and is appalled by it. It is unclear when the incident took place.

The Department of Correctional Services was mum on whether the prison warden who was filmed apparently drunk whilst on duty was still reporting for duty.

Spokesperson Singabakho Nxumalo told this publication that there was no clarity on whether the officer was under suspension pending the investigation against him.

"I checked with the investigator and [he] is not providing any information at this stage‚" said Nxumalo.

"We have instituted an investigation and we will inform the public once it has been concluded. We are taking this matter quite seriously‚" he said.

Nxumalo told this publication that the warden was from St Albans Correctional Services. He said the department was appalled by the video which circulated on social media. In the video‚ the prison warder is sitting on a chair with what appears to be a coat over his head.

The Department of Correctional Services (DCS) is appalled by a video of a “plastered official”.
News
3 years ago

"Are you fit for duty?" the person filming the video asks him.

Later on‚ he is asked to stand on one leg but struggles. Next‚ he is asked where his gun is because his holster is empty. The prison warden struggles to find his gun.

Nxumalo said: "The Department is deeply appalled and aggrieved by this video. A conduct of this nature can never be allowed in DCS."

He added that officials were expected to maintain a "sound state of mind and be professional in performing their duties".