Lawyer charged with assault for pointing his finger at cop 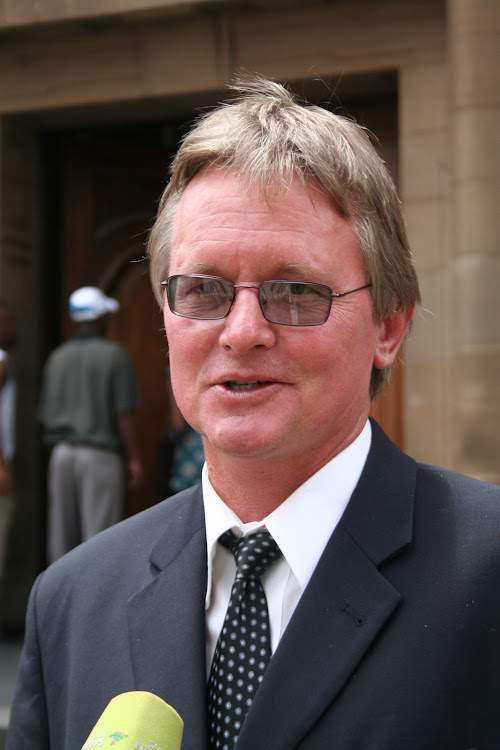 Lawyer Richard Spoor has been charged with assault after pointing at a police officer
Image: VATHISWA RUSELO

South African human rights attorney Richard Spoor is well-known for his sharp mind and forthright tongue‚ but now he has run into deep trouble because of his finger – or‚ to be more exact‚ for assaulting a police officer “by pointing him with a finger”.

Two weeks ago‚ the Nelspruit-based attorney was involved in a heated verbal encounter with mineral resources minister Gwede Mantashe and senior Eastern Cape police commissioner Maj-Gen Andre Swart on the Wild Coast‚ which ended with Spoor being carted off to the local cop shop and charged with assault.

Spoor‚ who represents members of the Amadiba Crisis Committee who are opposed to an Australian-led mineral sands mining project near the village of Xolobeni‚ had complained that anti-mining residents were being marginalised from Mantashe’s public meeting.

He later appeared in the Mzamba Magistrate's Court‚ where the case was remanded to October 25.

Hundreds from provinces including Mpumalanga and North West had travelled to Pretoria to support the people of Xolobeni.
News
4 years ago

But now Spoor is back in the news after posting a copy of his charge sheet on Facebook on Friday. The charge sheet reads: “The accused is guilty of the crime of assault in that on or about September 23 2018 … the accused did unlawfully and intentionally assault Andries Petrus Swart by pointing him with a finger.”

His post has set off a chain of comments from his Facebook followers‚ some of whom remarked that it was fortunate that Spoor had not “thrown him with a stone”.

Allison Thomson wanted to know just which finger he had pointed‚ while Pieter Steyn cautioned‚ “Don’t touch me on my finger.”

Truida Prekel commented: “Which finger? In German you can give someone a ‘Stinke Finger’. That is rude!”

But other followers were not quite as amused‚ commenting: “What a stupid‚ immature little chip off someone else’s political shoulder. What a waste of time and our money to try in all predictable futility‚ to justify the ego trip of a small man in a big world.”

Another follower commented: “Hey Richard! This serious stuff. Just as well capital punishment has been abolished; who knows what could befall you?”

Liam McKay asked: “Was your finger loaded at the time?”

And Piet Meyer observed that perhaps the finger is mightier that the sword.

Prominent human rights lawyer Richard Spoor appeared in court on Tuesday on several charges‚ including assaulting a police officer and incitement to ...
News
3 years ago

Shortly after Spoor was arrested‚ Mantashe’s office was invited to comment on the circumstances leading up to Spoor’s arrest.

A spokesperson for the department of mineral resources said: “In short‚ discussions were positive. All parties present were given an opportunity to present their views either for or against mining‚ including a representative of the Amadiba Crisis Committee.

“It’s unfortunate that that a small group of people were instigated to disrupt and suppress discussions‚ but the meeting proceeded as planned.”

On why Spoor was arrested‚ the department said: "Kindly contact Mr Spoor or the local police for comment regarding his arrest.”

Eastern Cape police spokesperson captain Khaya Tonjeni responded: “The matter is in front of the court of the law and unfortunately as the Eastern Cape police‚ we cannot comment on a matter that is sub judice”.

However‚ a videoclip from the scene showed Spoor‚ shortly before his arrest‚ engaged in a heated discussion with Mantashe outside a large marquee erected during the minister’s weekend tour to address community tensions over several mining ventures.

“Don’t call me a liar please! I am trying to help you. If you work with us we can work together to solve problems‚” Spoor told Mantashe in the clip.

Mantashe responded: “Okay. But you are disrupting my meeting.”

Mineral Resources Minister Gwede Mantashe has distanced himself from reports by Australian company Mineral Commodities that the government is ...
News
3 years ago

Spoor is described on his company website as a pioneer in the fight for workers’ rights and safety over the past 20 years.

He is a graduate of the University of Cape Town. He served his articles of clerkship with human rights lawyer Priscilla Jana in 1985 before joining labour law firm Cheadle Thompson and Haysom‚ where he became a partner.

“During this time‚ he represented people and organisations engaged in the struggle against apartheid. With the advent of democracy in 1994‚ he moved to White River‚ Mpumalanga‚" states the website.

“Among Spoor’s most notable settlements were those achieved on behalf of asbestos miners with Gencor and the Swiss multinational Eternit. These settlements led to the creation of the Asbestos Relief Trust and the Kgalagadi Relief Trust‚ both of which have to date paid more than R320m in benefits to thousands of sick mine workers or their dependants suffering as a result of asbestos exposure.”