'I am not my brother's keeper' - Twitter weighs in on Floyd Shivambu, his brother and that VBS payment 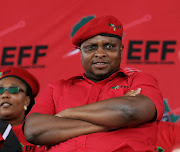 As EFF deputy president Floyd Shivambu remains mum about his brother's alleged involvement in the VBS Bank scandal, Twitter has been on fire about the issue.

The South African Reserve Bank released a forensic report on VBS which revealed that the bank had been defrauded in municipal funds and taxpayers money amounting to billions of rand.

The EFF released a statement on Wednesday stating it had "noted" the report, but made no reference to Brian Shivambu - who had been identified as the EFF leader's brother - and was named as an alleged recipient of over R16m.

On Twitter the hashtags #VBSBankHeist and #Floyd have been trending since the revelations.