Jailed for life‚ then cleared of all charges - 'I lost everything' 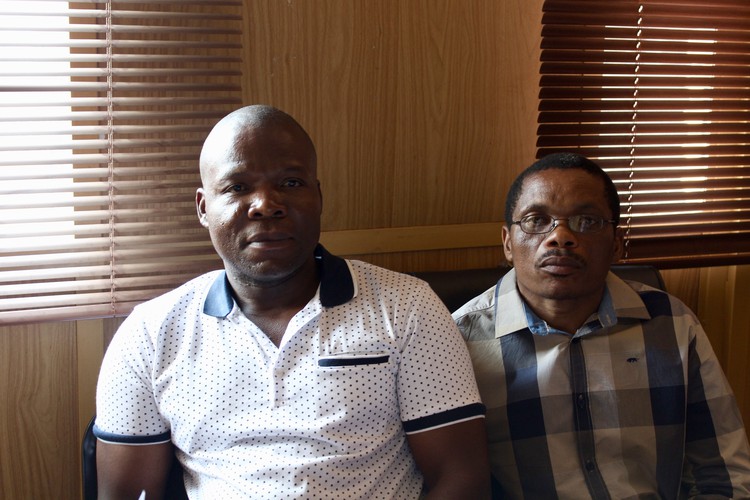 Marcus Mulaudzi (left) and Samuel Nndwambi (right) were sentenced to life imprisonment for murder in 2006. They were exonerated in 2016 and 2018, respectively. They are now suing the state for malicious prosecution.
Image: Aidan Jones

“The state arrested me unlawfully and now release me and they don’t care about how my life is affected by this‚” says Marcus Mulaudzi. “I lost everything I had. I was a breadwinner. I used to make sure that everybody had what they needed.”

Mulaudzi was convicted and sentenced to life imprisonment for murder in 2006 at the age of 32. He was cleared of all charges in 2016 after a lengthy and costly appeal process but since his release he has struggled to get by. He now does piecework installing aluminium doors and windows in houses.

Samuel Nndwambi‚ one of Mulaudzi’s co-accused‚ was also sentenced to life imprisonment and served 12 years in prison before being released on appeal in June 2018. “It’s difficult now because I am not working. Everything that I had – my working materials‚ my tools – are gone. I am struggling now. My child supports me financially‚” says Nndwambi.

Department of Justice and Correctional Services spokesperson Mukoni Ratshitanga says‚ “The law provides for those who believe they were wrongfully detained or incarcerated to pursue legal remedies through the courts and the state complies with orders by the courts‚ including compensation.”

The police minister has been ordered to pay R560‚000 in damages for the unlawful arrest and detention of a young man.
News
3 years ago

However‚ suing the state requires legal representation and unless one can secure pro bono assistance from Legal Aid or willing private lawyers‚ there are legal fees to pay. Fortunately‚ Mulaudzi and Nndwambi are being assisted free of charge by Sigwavhulimu Attorneys‚ the same lawyers that secured Nndwambi’s successful appeal.

“We are busy with a civil claim for malicious prosecution for both men‚” says Agnes Ramanyimi of Sigwavhulimu Attorneys. “We are looking for compensation and are suing the Minister of Justice and the NPA. We had pretrial conference with the lawyers of the NPA earlier this year.” She says they are currently arranging a date for the trial at the Thohoyandou High Court.

Ramanyimi says she strongly believes the men were treated unjustly. “They were making a life. They were making a living. Mulaudzi had his own taxi. They had children and a family. Well settled. Next thing you get frustrated by the justice system. You go to jail for 12 years. And then you come back and you are unemployed. They’ve been treated roughly in prison. You don’t have money … When you left you were just a gentleman of thirty-something years. Now you are forty-something [Nndwambi is now 51]. Where do you start to adjust with this life?”

Ramanyimi says getting compensation cases for malicious prosecution are very difficult. “We can’t guarantee‚ it’s a touch and go.”

“One slight mistake and you will lose the whole case‚” says Ramanyimi. “Such as forgetting to lead the judge on something technical‚ or if I happen to omit something important‚ the lawyers for the respondent will note it and inform the judge and your case is blown. And remember‚ the loser in a civil case pays the costs.”

Mulaudzi says he had nothing when he was released. “Not even clothes‚ I had to start from scratch‚” he says. “I had to ask my mother for money to travel to town [central Thohoyandou]. When you come from being a taxi owner earning good money‚ a provider for your family‚ and then now you come out of prison and you don’t have anything‚ you have to ask your mother.” He says it was humiliating for him.

Paul O'Sullivan to sue state for R193-million for wrongful arrest

Paul O’Sullivan is to take the police and senior government ministers to the cleaners.
News
4 years ago

“No amount of money can restore them to the life they had before‚” says Ramanyimi. “In my view‚ what would be fair … would be an amount of about R2-million each. But the idea is to compensate‚ not enrich.”

Criminal law expert William Booth says‚ “In general people who sue the state for compensation struggle to get payment from the state. Literally each case where a person institutes a civil claim for damages‚ the state will oppose.”

Booth says that civil claims can be made against a number of persons‚ such as “the police‚ the NPA‚ a judge or a magistrate … This will all depend on whether any of [them] are possibly personally liable for a claim of compensation.” Willie Hofmeyr‚ head of legal affairs at the NPA‚ explains that malicious prosecution is “where the court rules that the prosecutor at the time did not have sufficient evidence to institute a prosecution”. In its judgment for both mens’ appeals the Supreme Court of Appeal ruled that there was insufficient evidence to convict.

Hofmeyr says that “almost all” claims against the NPA are for malicious prosecution. “Generally‚ we win about 65% of cases. In other words‚ no money is paid‚” he says.

According to the NPA’s 2017/18 annual report‚ the number of civil claims against the state entity has trebled during the last five years and doubled in the last three years. The number of claims increased from 509 in 2012/13 to 1‚732 in 2017/18. The previous years’ report states that “it is likely that significant increases will continue for the foreseeable future”. These are not only malicious prosecution cases.

“A significant part of the increased trend is from a few attorneys firms that go looking for work‚” says Hofmeyr. “They go to communities to collect a large number of cases‚ mostly without merit. Essentially they try to make money by bringing a large volume of claims and exploiting the inefficiencies in the state by getting cost orders.”

“The majority of prisoners who are released after serving a sentence have great difficulty reintegrating into society‚” says Booth. “They are usually not assisted by the state but by NGOs and community organisations‚” he says.

“My whole life has changed and you can’t do anything about it. I am worse off than someone who left prison on parole because when they leave they are assisted with reintegration‚” says Mulaudzi.

“Offenders released on parole still fall within the Department of Correctional Services monitoring and interventions programme‚ through Community Corrections‚” says Vanessa Padayachee‚ manager of advocacy and lobbying at The National Institute for Crime Prevention and the Reintegration of Offenders (NICRO).

NICRO’s reintegration programme is the same for people like Mulaudzi who have been exonerated‚ and offenders released on parole or after serving their full sentence. “Each former inmate has an individual psycho-social assessment and interventions are planned accordingly‚” says Padayachee.

Muluadzi says his cousin Sam Mulaudzi‚ who paid for the legal fees for his appeal‚ has also arranged a psychologist for him. Sam is a construction entrepreneur and says he paid “about R500‚000 assisting Marcus over a period of about ten years”.

Padayachee says that improved investigation by police can help to prevent malicious prosecution and wrongful conviction. She says that organisations should work together with government departments to create employment opportunities for former inmates as part of a comprehensive national reintegration strategy.

Mulaudzi says he only knew Nndwambi as a customer of his taxi service before they were convicted. “We have become close friends since he was released‚” says Mulaudzi‚ who has been helping Nndwambi get reacquainted with the world.

Wrongfully convicted men struggle to get compensation
Next Article