Trains in full motion as Prasa is granted a reprieve 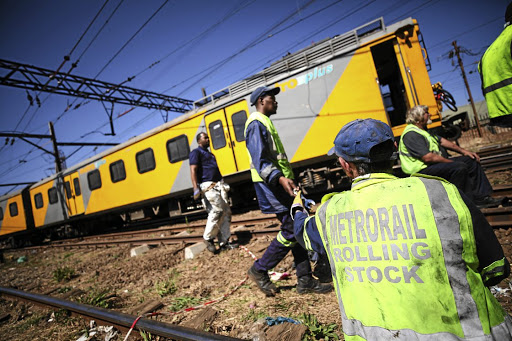 Metrorail workers at the scene of an accident in which two trains collided last month in Selby near the Booysens Station, south of Johannesburg. More than 900 train passengers have been injured since January.
Image: Alaister Russell

Train commuters were nearly left stranded this week as authorities took each other to task over the safety of the country's rail network.

The Railway Safety Regulator at the weekend pushed for the suspension of safety permits for the Passenger Rail Service of SA (Prasa). This would have led to about two million daily train users being left in limbo.

The regulator's action followed yet another train accident last Thursday.

But Prasa yesterday succeeded in stopping the suspension from coming into force from this morning.

Train commuters may have to find alternative forms of transport if the latest statement issued by Railway Safety Regulator (RSR) is anything to go by.
News
2 years ago

The North Gauteng High Court in Pretoria will hear Prasa's application in full on Thursday. Prasa seeks a court order to prevent the regulator from suspending its safety permit.

The regulator's spokesperson, Madelein Williams, said Prasa's safety permit was being suspended due to its failure to comply with special conditions.

More than 900 train commuters have suffered injuries and 24 lost their lives in four train accidents since January.

"Prasa had approached the courts for an interim order to lift the suspension of the safety permit imposed by the regulator.

"The reprieve granted by the court means there will be no interruption to the train service. Metrorail and long-distance passenger service will run as normal."

A 112 people were injured after two Metrorail trains collided this morning in Selby, Johannesburg.
News
2 years ago

This prompted the regulator to issue a 48-hour notice for all passenger train services to be stopped nationwide.

One train was stationary due to alleged technical problems when it was rear-ended by another, with both travelling to Johannesburg carrying about 4000 passengers between them.

Transport minister Blade Nzimande yesterday said he was studying the court's decision on the matter. He said he believed the boards of the regulator and Prasa and management teams were capable of resolving the matter. He urged the two parties to find an amicable solution.

"Such a decision must border on the provision of a safe and secure Metrorail operation and must be in line with both the founding legislation of the regulator and Prasa," said Nzimande.

The United National Transport Union (Untu) recently warned that passenger trains were "death trains" and that the situation was life threatening for both commuters and drivers every single day, with more than half of all authorisations being done manually.

The Passenger Rail Agency of South Africa (Prasa) confirmed on Thursday that it had been granted a one-year safety permit to operate the country’s ...
News
2 years ago

Prasa relied on manual authorisations due to faulty signals as a result of vandalism, ageing infrastructure and cable theft, among others.

Zenani said the use of manual authorisations depended on affected regions being able to respond to cases of vandalism on their infrastructure.

Williams, however, said it has "noted with concern the increasing number of train collisions that are taking place within degraded mode of train operations as a direct result of wrongful manual train authorisations".

She accused Prasa of failing to adhere to a directive issued earlier this year, which included "special conditions attached to Prasa's safety permit, which relates to the provision of adequate supervision and countersigning of manual train authorisations".