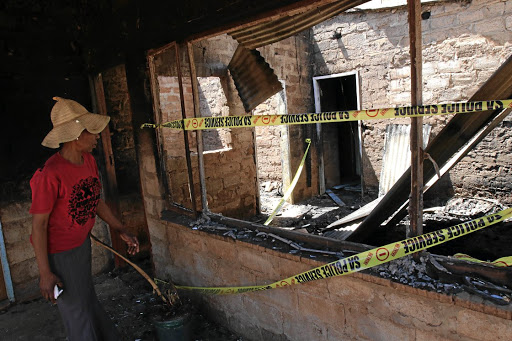 The house petrol-bombed by a person allegedly known to the Kekana family, killing three people at Sekgakgapeng village in Mokopane, Limpopo, is in total ruins. / ANTONIO MUCHAVE

The mother whose two children died when the house they were sleeping in was petrol-bombed is blaming their deaths on the police's failure to arrest her former lover.

Kedibone Kekana, 27, from Sekgakgapeng village outside Mokopane in Limpopo, told Sowetan that she suspected her jilted baby father was responsible for torching her family's home after he refused to accept their break-up, and wanted to take their two-month-old infant from her.

She said the father of her baby had been making serious threats, promising to kill her entire family.

The fire on Friday night killed Kekana's two children, Kamogelo, 5, and Sadie, 2, and seriously injured her mother, 58, who is recovering from smoke inhalation and burns at the Mokopane provincial hospital's intensive care unit.

Speaking from her wheelchair, Kekana said: "I went to Mahwelereng police station on four occasions in the last three months following his persistent physical assault, but police refused to open a case.

"Last Wednesday I went there to lay a criminal charge against my ex-boyfriend after he made threats on my life. It was only on Thursday when the case was opened, and I was given a case number, but they didn't arrest him," she said.

Ngoepe said they viewed the allegations on the police's failure to act as a serious matter.

"The provincial police commissioner Lieutenant-General Nneke Ledwaba has established a team to investigate the matter in full and that the necessary and corrective steps will be taken against any guilty member[s].

"We are therefore requesting cooperation from all members of the community in that village on this process," he said.

Kekana said that on Friday, while her parents and three children were sleeping, she heard a window smashed.

"Then next thing I saw smoke and flames in the kitchen. I quickly grabbed my son and we ran out of the house.

"I screamed for help because the fire was too much to bear and I could not go back to rescue my other two children and my parents," she said.

"Some community members came and managed to rescue my parents.

"Unfortunately, my eldest daughter died on the scene while the other lost her life on her way to hospital," she said.

Kekana and the alleged suspect have one child together.

Kekana said she was convinced that her ex-boyfriend was behind her daughters' deaths.

"I want him to rot in jail and never come back. I ended our relationship two months ago, but he kept on harassing me," she said.

A family member who only identified herself as Mma Kekana said they heard rumours that the alleged suspect also wants to kill every relative.

"We are living in fear and please don't publish our names because we are not safe.

"This is more cruel; the old man who was sleeping in the house was suffering from a stroke and I can imagine he was staring at death with nowhere to run," she said.

When Sowetan visited the two parents on Saturday at the hospital, they couldn't speak or open their eyes.

Ngoepe said the motive behind the incident was still unknown, but domestic violence could not be ruled out.

"Cases of two counts of murder and arson were
opened. The suspect is still on the run.

"The police request Bongani Abraham Boshomane aged 45 to report at Mahwelereng or the nearest police station to assist with the ongoing investigation of the matter," said Ngoepe.