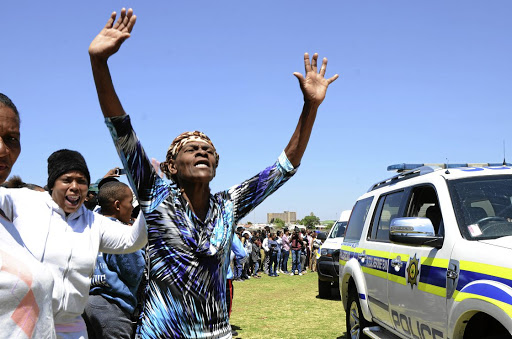 A Westbury, Johannesburg, bishop claims he has buried no less than 25 people in two years killed as a result of gang turf wars in the area.

Bishop Dalton Adams, a local clergyman and community leader, expressed hope yesterday that police intervention in the area will bring an end to the killings that have seen bodies piling up in recent years.

Adams said the gang wars in the predominantly coloured township have torn apart the fabric of the community.

Adams was speaking to Sowetan shortly after police minister Bheki Cele paraded 141 officers attached to the Tactical Response Team, known as amabherete, in the area.

Bheki Cele to reveal the antidote to gang violence in Westbury

The officers, who also include those from the National Intervention Unit (NIU), will be deployed in Westbury to quell the drug-related crimes.

Adams also spoke about his displeasure of burying people he has grown up with or have known throughout the years.

"It takes an emotional toll. It traumatises families because in most instances their relatives were not even part of any gangs. They just happened to be at the wrong place at the wrong time," he said.

Adams also said he has provided counselling sessions to families of the deceased to ensure that they come to terms with the deaths of their loved ones.

"It's difficult to have to conduct funeral services of people you know. You see the pain in the eyes of their children and parents and can't imagine what they are going through," Adams said.

"I hope this [police deployment] will go a long way in rooting out the drug dealing and senseless murders in this community."

Cele deployed the officers in the area as a response to the community's request to intensify policing efforts.

Cele said 131 of the officers were present at the parade, while 10 would be used to infiltrate the community in a bid to arrest drug peddlers.

"We are making a call on them (drug lords), come and face us, come and face those who are standing there," he said, pointing to police officers in the parade.

"From that side it will be members from JMPD (Johannesburg Metro Police Department), the dog unit, NIU - all those people you see there, we don't give them rubber bullets. We give them real stuff. So we are making a plea, we are making an invitation to [drug lords] to come out and face them," he said.

Heather Peterson, 46, was the latest victim of the drug-gang war in the area after she was hit by a stray bullet during a gunfight last week. Her death sparked the current unrest in the area.

Meanwhile Anthony Williams, one of the organisers of a planned shutdown today, said protests would go ahead as planned. "Our people in different areas have been talking and there are meetings planned. We are talking about the West and East Rand and Central Johannesburg. This will be done in solidarity with the people of Westbury," Williams said.