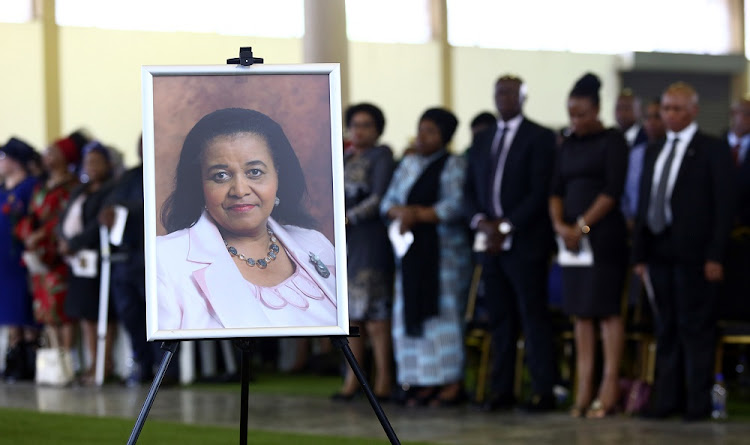 A portrait of the late Minister Edna Molewa is displayed during the official memorial service held at Tshwane Events, on Wednesday, October 3 2018.
Image: Masi Losi

The late minister of environmental affairs Edna Molewa died at the time when the governing party was reasserting its revolutionary principles, higher education and training minister Naledi Pandor lamented yesterday.

Delivering the keynote address at Molewa's official memorial service in Pretoria, the minister said Molewa would have played an important role in reasserting the ANC's values and culture as she devoted her life for positive outcomes.

"She would most certainly have played a key role in the reassertion of our true values and the ethos of the ANC. She has always devoted her life to achieving positive outcomes for SA, the party and her department," she said.

Pandor said Molewa was a devoted patriot, and that losses such as this one were beyond comprehension, noting that the country had lost a warrior woman in the prime of her life.

Speakers took turns sharing their experiences with Edna Molewa, the late minister of environmental affairs, at the memorial service on Wednesday but ...
News
3 years ago

Pandor said during the state visit to China, Molewa was jovial, elegant and engaged.

"She was warm, loving, ethical and unafraid to express her viewpoint," the minister said.

North West premier Job Mokgoro said Molewa was the brightest star to ever come from the province, distinguishing herself as an esteemed leader of the people.

He said Molewa had a rare ability to build long-lasting relationships between local, national government, labour as well as civic organisations.

Her friend and minister of basic education Angie Motshekga said at the recent ANC national executive committee meeting they had put Molewa's picture where she was supposed to be seated.

"I had to sit next to the picture and on the second day, I had to find another seat as I could not take it anymore," she said, as she held back tears.

Molewa fought for cleaner, greener world for all

Minister believed that through the development of waste economy, inequality, poverty can be defeated.
Lifestyle
3 years ago

The tribute by her children left mourners captivated with intimate moments with their mother. One could hear a pin drop in the large hall of the Tshwane Events Centre in Pretoria West as her daughters - Keneilwe Mogosoa and Didi Sethemba - read the tribute.

They shared the memories of their upbringing, the love their mothers had for them and the love they had for her.