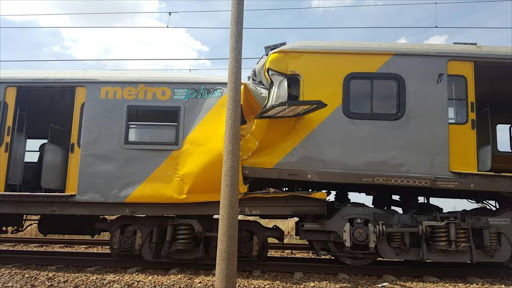 More than 300 people have been injured in tarin collision in Kempton Park.
Image: FILE

Just over 300 people were injured when two train collided at the Van Riebeeck Park Station near Kempton Park on Thursday afternoon.

Despite the damage to the trains‚ there were no fatalities.

She said Metrorail train 0659‚ travelling from Johannesburg Park Station to Pretoria‚ collided from the rear with train 0663‚ which was faulty and stationary at Van Riebeeck Park Station at 5.50pm.

She said a board of enquiry would be instituted to determine the cause of the accident and that Passenger Rail Agency of South Africa would be working closely with other authorities. “Metrorail technical teams will be working around the clock to recover the site. The cost of the accident is still unknown at this stage‚” Mofokeng said.

William Ntladi‚ of the Ekurhuleni emergency medical services‚ said a call was received at 5.50pm stating that there had been a train collision at the station.

“On arrival‚ we found two Metrorail trains had crashed. Both of them had passengers. Both trains were destined for Pretoria‚” Ntladi said.

He said different ambulance and rescue services assisted the injured.

Those who were not injured used another train which was made available to travel to their destination.

“As we speak‚ the station is clear of any commuters‚” Ntladi said before 9pm.