Bheki Cele to reveal the antidote to gang violence in Westbury 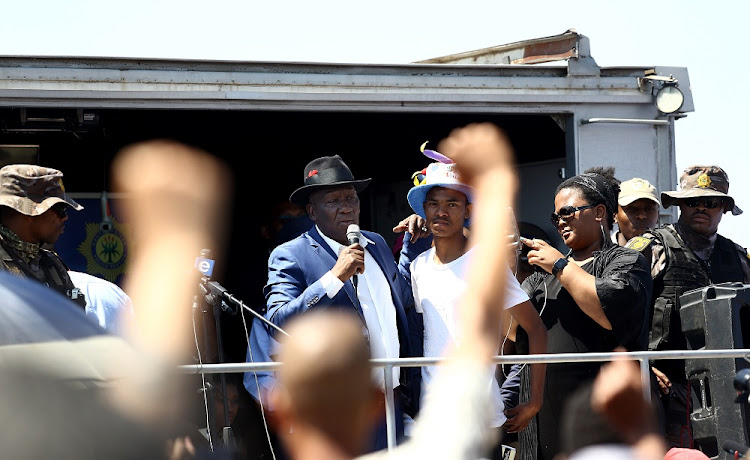 Minister Bheki Cele addresses the community of Westbury after a clash with the police on Monday resulting in people being arrested.
Image: Masi Losi

Police minister Bheki Cele returns to crime-ridden Westbury in Johannesburg on Thursday as residents continue to call for drastic measures to curb the scourge of drugs and gangs in the suburb.

"[They will] officially parade the newly and permanently deployed Tactical Response Team (TRT) [known as Amaberete]‚ dedicated to the Westbury policing precinct as part of the broader strategy to fight the scourge of drugs and gang-related violence in the area‚" Cele's office said in a statement.

"The visit is pursuant to the commitment made on Tuesday in which the minister had a community engagement with members of the community of Westbury following incidents of gang-related violence and subsequent community unrest."

Protests erupted in the area last week after 45-year-old Heather Peterson was killed during a shootout between three men. He daughter‚ 10‚ was wounded in the incident.

Residents vowed to shut down the area and called on government to deploy the army to clean up the area. The community accused the local police of corruption‚ alleging that they had colluded with criminals in the area.

When Cele visited the area on Tuesday‚ he said police had arrested two men in connection with the earlier shooting of Peterson. Two other suspects were at large.

"We commit ourselves to coming back to work on the matters the community have raised. We will ask other departments to be part of the meeting next week so you can raise the matters‚" he said.

Following his visit‚ some community members began cleaning up the streets. Police spokesperson Kay Makhubele said on Wednesday: "Police were alerted about gunshot sounds in the area. Police rushed there and found empty cartridges on the ground. No one was on the scene‚ however a case of attempted murder was opened."

Times Select painted a picture of life in the suburb in an article on Wednesday that described how primary school children greeted each other by asking: "Which gang do you belong to? Are you part of the Fast Guns or Varados?"

Enough is enough. That was the cry of a resident who is fed up with crime in Westbury.
News
3 years ago

Officers raided a unit that residents believe is a drug den or “lolly lounge”.
News
3 years ago
Next Article