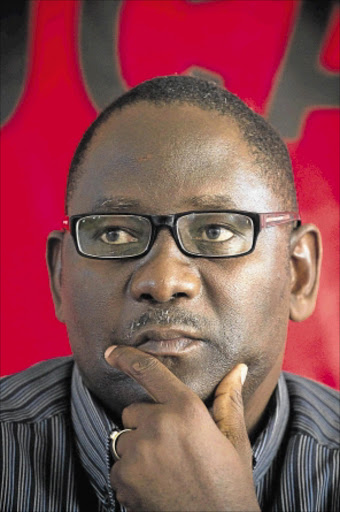 A sexual harassment claim against SA Federation of Trade Unions (Saftu) general secretary Zwelinzima Vavi was a “misunderstanding” and has been settled‚ the union says.

It said both parties had agreed in writing that there had been a misunderstanding between them and that the female complainant had stated that she did not want to take the matter any further.

SowetanLIVE reported on Friday that Vavi had allegedly been caught up in a new sex scandal involving an employee which had resulted in him getting a warning.

The publication said it had been reliably informed that a cleaner who worked for the National Union of Metalworkers of SA (Numsa) – an affiliate of Saftu - had filed a sexual harassment complaint against Vavi after his alleged conduct had caused her stress.

In a statement on Friday evening‚ Saftu said: "For the record‚ it is true that a Numsa staff member expressed her discomfort and made allegations that the Saftu general secretary made unwanted sexual advances and/or handled her inappropriately.

Numsa and Saftu had given the complainant a chance to "express herself" and say how she wanted the matter handled and Vavi was also asked separately for his version.

"He denied the allegations‚" Saftu stated.

“Following this facilitated process‚ the complainant advised that she requested a formal apology from the General Secretary of Saftu to settle the matter. It was her desire to have the matter settled informally‚ and kept confidential. To this end‚ both parties agreed in writing that there had been a misunderstanding between themselves.

“Saftu is satisfied that this matter was handled fairy‚ with the best interests of the complainant at the heart of the chosen process. In our view justice was served.

“Our commitment to a society that will defeat thousands of years of patriarchy remains unshaken. These allegations against the person who is the public face of the organisation tested our resolve to the creation of a workplace and society free from sexual harassment and violence.

“We have frequently demanded that employers take strong action in particular against cases involving senior leadership or management to send an unequivocal message that sexual harassment and gender violence are not tolerated and that an environment free from these evils is created. Saftu does not want to contradict that commitment in any way even in the case involving its most senior leaders such as the general secretary‚” the federation said.