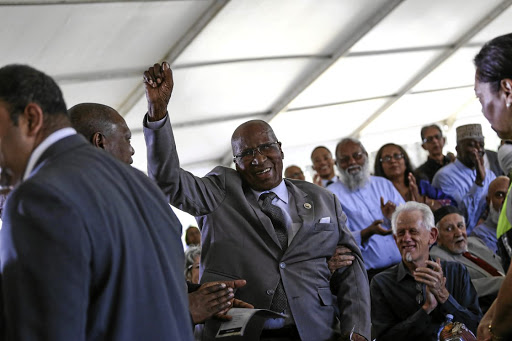 Rivonia trialist Andrew Mlangeni has welcomed the availability of 250 hours of recordings of the trial which culminated in Nelson Mandela and his comrades being sentenced to life imprisonment.

The recordings of the infamous trial at the Palace of Justice in Pretoria which saw among others Mlangeni, Mandela, Walter Sisulu and Govan Mbeki facing high treason were now available for all to access after they have been digitised.

Speaking from his hospital bed yesterday, Mlangeni, one of the two surviving Rivonia trialists, said he had been waiting for the moment for a long time. "I am happy that South Africans will get to know more about what happened in that court. I hope everything has been recorded correctly. However this is a good thing and I am happy that it is finally happening.

"I am just worried that I will not be able to listen to the recordings because I am not well as it is, I am in hospital," said the 93-year-old Mlangeni.

How much would you pay to spend a night in the Robben Island cell that the late former president Nelson Mandela spent 18 years locked in?
News
3 years ago

The 1963-64 courtroom sound archives have now been restored.

Dumisani Basina from the National Archives and Records Service of SA (NARSSA) said as the department it had a mandate to preserve South African heritage.

"In 1996 when the department of justice transferred the Rivonia Trial records to NARSSA, the officials realised that not all the paper records related to this historical court case were present. The most complete set was the Rivonia Trial dictabelt which consisted of more than 250 hours of audio. Then there was a need to digitise them."

He said in 2013 an agreement was signed in Paris between Instistut national de l'audiovisuel (INA) and the department arts and culture which subsequently led to the dictabelts being transported to France, and digitised before they were returned to SA.

"The second phase of our cooperation with INA led to the training agreement signed in March 2016 at the Palace of Justice in the court room where the Rivonia trial originally took place.

"After rigorous training in France and currently in SA, NARSSA will now be able to digitise huge collections in its archival repositories using the Archeophone which is the machine invented to digitise the dictabelts."

French sound engineer Henri Chamoux who invented the Archeophone phonographs said he was the first to edit the Rivonia Trial.

"I was honoured and privileged to be able to invent phonograph which was used to restore the recordings and also demonstrate the digitisation of the archives."

Senior activist at the Nelson Mandela Foundation, Razia Saleh said people will get to hear the day-to-day recordings of the trial.

"This seeks to celebrate the unique heritage that the restored sound archives represent to the South African public."