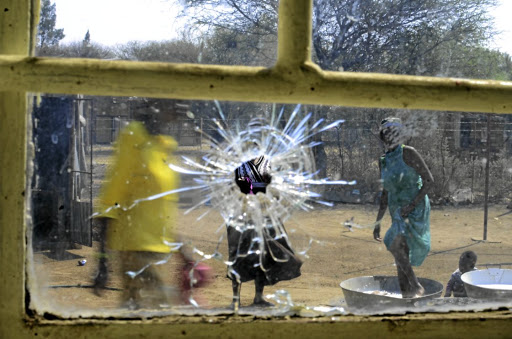 A bullet hole in the window of the house where Lenah and Motlalepule Motsatsing were shot dead.
Image: Tiro Ramatlhatse

A jilted man has allegedly shot dead his ex-girlfriend and her mother after he refused to accept the break-up.

The suspect, who was arrested yesterday, also allegedly shot and critically injured their two-year-old daughter and the ex- girlfriend's brother.

The shooting happened in Lonely Park Village, in Mahikeng, North West, on Tuesday when the man - a security guard - visited Motlalepule Motsatsing, 29, the mother of his two children.

The family said the suspect paid for Motsatsing's tuition fees at a local college and refused to accept it when she dumped him.

He had also reportedly built a house for them to live in together with their two children.

But, two weeks after the man's attempt to rekindle his relationship with Motsatsing failed, he went to her home and allegedly killed her. 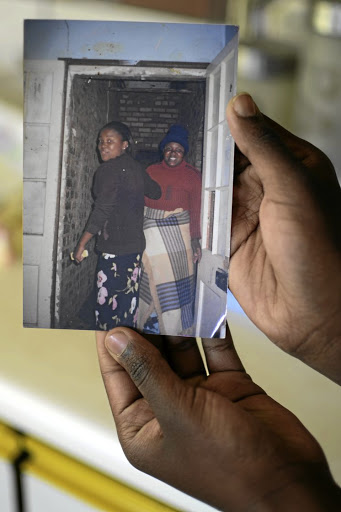 The man cannot be named as he has not been charged yet.

He allegedly shot Motsatsing twice in the back using his work firearm when she tried to run from him.

He then allegedly shot their two-year-old daughter - who witnessed her mother's killing - in the shoulder, before turning the gun on Motsatsing's mother, Lenah, and brother, Lesego, who were both shot in the chest.

The two-year-old girl and Lesego are in critical condition in hospital, according to police and the family.

Motsatsing's uncle Neo Mmusi, who witnessed the shooting, said he was still traumatised and fearful, not knowing whether the man would come back to finish them off. "I could not eat anything since yesterday, I even collapsed. He shot four people who were close to me," he said.

He said he was sitting inside a shack in their yard when he heard Motsatsing screaming for help.

Within a few seconds, he heard gunshots. "While we were trying to go and see what was really happening, he shot her again in her back. At that time she was lying on the ground," Mmusi said.

He said they then ran into the shack and blocked the door. The man's four-year-old daughter, who survived, was sleeping in the house at the time.
The two-year-old daughter was standing next to him when all this happened.

"He took the same gun and shot the little girl, it was horrible," Mmusi said.

He said while everyone was trying to run for cover, the furious ex-boyfriend then shot Lesego before turning the gun on Lenah.

Another uncle, William Sesinyi, said the two had separated but the man refused to accept it and move on.

Sesinyi said two weeks ago the man came to him seeking his intervention to bring them together. The man wanted Motsatsing back and had asked Sesinyi to talk to her to give him a second chance.

"He would even go to the extent of buying her a wedding ring and proposing to her in front of her colleagues at work [after they broke up]," he said.

Sesinyi confirmed the man had also paid for Motsatsing's college fees. "He really loved our daughter; he would go and look for her at her new boyfriend's place, sometimes go and fetch her from the tavern," Sesinyi said.

"They have been together for a while, they have two daughters, but their relationship had ups and downs."

Motsatsing and her mother will be buried next week Saturday.

The suspect is expected to appear in court tomorrow.