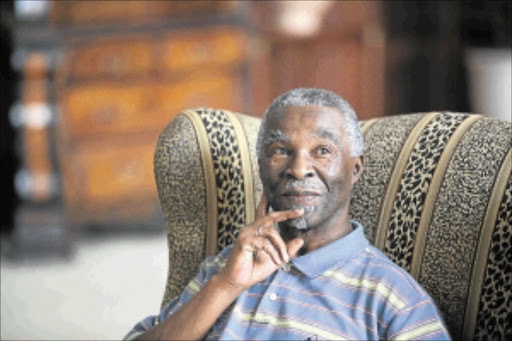 The ANC in KwaZulu-Natal has accused former president Thabo Mbeki of going overboard by criticising his successor‚ Jacob Zuma‚ for calling “black people” to unite to obtain a two-thirds majority in parliament to amend the constitution to allow for land expropriation without compensation.

“Now what we are taught in the movement by engaging others is that the leadership of the ANC should avoid the temptation to cast aspersions on those who led before you. When I read that reflection on the land question‚ radical economic transformation‚ the trajectory of our country‚ I felt that Thabo Mbeki was not only doing what he should have done‚ which is to intervene intellectually to analyse our reality and produce some suggestions‚ but he was also somehow directly questioning the understanding of the former president and his predecessor of the ANC and the trajectory the ANC has been pursuing over the past 106 years in terms of the national question.”

Ntuli said he did not think that Mbeki’s weighing in on the sensitive land question should have been done the way it was‚ let alone finding its way into the public domain.

“He is a former president of the ANC. He has the right to sit in the NEC. I think that the debate could have been more productive and more dignified if it is taking place internally in the movement‚ so that when we go out we go with a uniting view about what we mean about the national question.

“Now we believe that this discussion is necessary but it must happen internally in the movement first and foremost because‚ if he takes to the public domain‚ the temptation to some of our comrades may be to deal with what appears to be personalised attacks to former president Zuma rather than the substance and content of his argument.”

However‚ Ntuli acknowledged that Mbeki had raised some critical issues which the ANC must engage on.

The paper leaked from the Mbeki Foundation questions the ANC’s approach to the land issue‚ saying it marks a short shift from the party’s values expressed throughout its 106-year history.

The paper argues that the posture of some leaders of the ANC mirrors more the position of the EFF than that of the governing party‚ which is long established through its history and its former leaders‚ as well as in the Freedom Charter.

It quotes former party presidents‚ the Freedom Charter and past ANC conference resolutions.

“Put simply and directly‚ the decision taken by the ANC… on the land question raises the question — who does the contemporary ANC represent‚ given its radical departure from historic positions of the ANC on the resolution of the land question‚" the paper says.

It also points to comments by Zuma in parliament in February when he called on "black parties" to unite to obtain a two-thirds majority to amend the constitution to allow for land expropriation without compensation.

“Jacob Zuma was advancing a perspective about the ‘resolution of the national question’ radically different from the long-established and historic position of the ANC … as part of this he [Zuma] also made bold to change the very nature of the ANC‚ characterising it as a ‘black party’‚” the paper says.

“It might be that at that time‚ many in the ANC did not understand that what Zuma was advancing was‚ in fact‚ a fundamental redefinition of both what the ANC is and its historic mission‚” it continues.

The foundation’s paper then goes on to quote Zuma‚ who it says commented after leaving office that SA should not be a constitutional democracy but a parliamentary one‚ implying that the "black parliamentary majority" should have the freedom to determine the future of the country without the constraints imposed by the constitution.

“By seeking to remove constitutional power and restraint‚ Zuma seeks to assert the possibility for mere parliamentary majorities to be abused as legitimising authoritarian rule by any party which would gain a parliamentary majority‚ including as this would have been achieved through corrupt means‚” it says.

The current position expressed by some leaders of the ANC on land expropriation without compensation shows that they have “accepted” to be led by the EFF on the matter.

The EFF position is a “vulgar and gross misrepresentation of the historic position of the ANC” on the national question‚ the paper says.

But the Thabo Mbeki Foundation on Wednesday said the internal discussion document on the land debate must not be misconstrued as an attack on the ANC or its leadership.