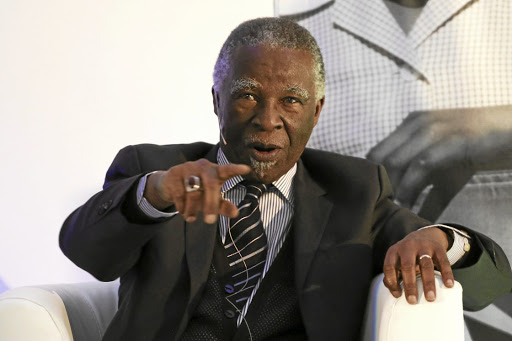 Former president Thabo Mbeki worries about the communication from the ANC in terms of the land question.
Image: Alaister Russell

Former president Thabo Mbeki has weighed in on the land question, saying the ANC has abandoned its historical values on nonracialism through its framing of the debate on land as one of black versus white.

The 30-page paper by the Mbeki Foundation, circulated on social media at the weekend, questioned the current approach by the ANC to the land issue as it marked a shift from the party's values expressed throughout its 106-year history.

The foundation says the communication from the ANC in terms of the land question indicates that the ruling party was no longer "a representative of the people of SA".

The paper argues that while the land question was an imperative that should be addressed, it should be done in a manner that also takes into account the "national question", which is to unite South Africans across race and class divides.

The posture of some leaders in the ANC, the paper says, mirrors more the position of the EFF than that of the governing party that is long established through its history and former leaders as well as the Freedom Charter.

The foundation points to comments by former president Jacob Zuma in parliament in February when he called on "black parties" in parliament to unite to obtain a two-thirds majority to amend the constitution to allow for land expropriation without compensation.

Mabuza was speaking at Heritage Day celebrations in Kokstad in KwaZulu-Natal.
News
3 years ago

"Jacob Zuma was advancing a perspective about the 'resolution of the national question' radically different from the long established and historic position of the ANC . as part of this he [Zuma] also made bold to change the very nature of the ANC, characterising it as a 'black party'," the paper said.

"It might be that at that time, many in the ANC did not understand that what Zuma was advancing was, in fact, a fundamental redefinition of both what what the ANC is and its historic mission."

The paper then goes on to quote Zuma after leaving office, saying that SA should not be a constitutional democracy but a parliamentary one, implying that the "black parliamentary majority" should have the freedom to determine the future of the country without the constraints imposed by the constitution.

"We have a very stifled policy environment where policies are seen in terms of 'us against them'," Mathekga said.

"...This is a very cogent observation [by Mbeki] of the ANC, which has shifted from multi-racialism, from inclusivity to the ANC that's set on implementing a policy as long as that policy is seen to be in the interest of the majority."