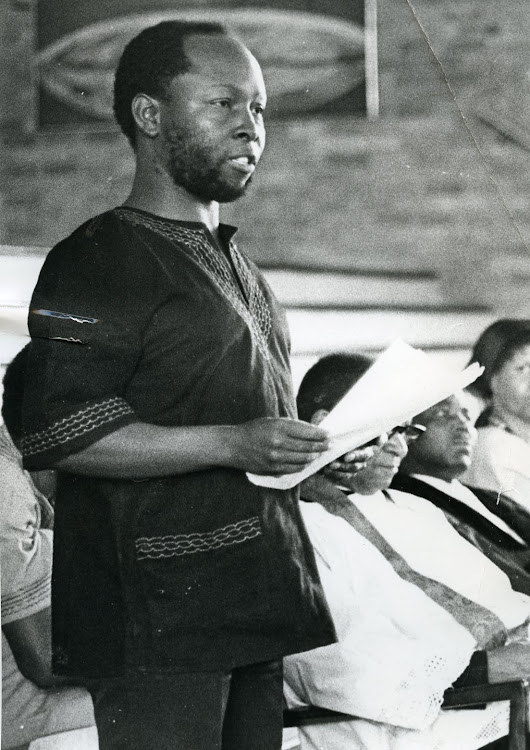 Playwright Zakes Mofokeng has died at the age of 79‚ the Pan Africanist Congress of Azania (PAC) said on Thursday.

Mofokeng‚ who also worked as an actor‚ musician and poet‚ had been living with Parkinson's disease and suffered from other old-age related ailments‚ PAC spokesperson Kenneth Mokgatlhe said. He is believed to have also suffered a stroke last year.

"He was checked in an old age home in Yeoville‚ Johannesburg‚ at the time of his death on Monday September 17‚" the party said.

He had three sons - Mpho‚ Tokelo and Tokollo - and a stepdaughter‚ Hope.

Sowetan archives state Mofokeng was known for his play‚ Never Again‚ which was staged at the Teatro Dallas International Festival in the US in 1995. His first play was The Train in 1974 followed by A New Song in 1989. He also wrote a television documentary‚ Monna Wa Minno‚ about the late Michael Masote‚ who started the first black youth orchestra in South Africa. The documentary was flighted on SABC2 in 2012.

As an arts practitioner‚ he led the cultural boycott campaign against apartheid South Africa. Said the PAC: "He confronted US musician Millie Jackson‚ visiting the country at the time‚ who stated startlingly that she was 'here for the dollars' and not for the black people's struggle against white supremacy."

He had previously worked as assistant manager for The Voice weekly ecumenical newspaper. He was also involved in labour unions after the Wiehahn Commission recommended that black trade unions be legalised in 1979.

However‚ Mofokeng was forced to skip the country‚ Mokgatlhe said. This was in the mid-1980s. He lived for a time in Switzerland as the PAC's labour representative.

Mofokeng will be buried on Saturday‚ September 29.