Man relives how car drove over him 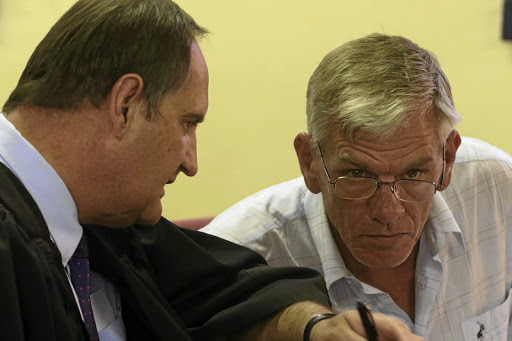 Mark Scott-Crossley listens to his lawyer Johan Engelbrecht during his appearance in the Lenyenye magistrate's court in Limpopo.
Image: ANTONIO MUCHAVE

The Limpopo farmworker who was allegedly attacked by ex-convict Mark Scott-Crossley in an alleged racial incident related on Wednesday how he was attacked.

Silence Mabunda, 37, told the Lenyenye magistrate's court that he saw Scott-Crossley driving slowly past him along the road after their altercation at a shopping complex in Hoedspruit in December 2016 where he had gone to buy airtime.

Mabunda said after Scott-Crossley drove past, he made a U-turn and drove towards him in a Jeep vehicle.

"As I was walking in the evening, I saw a vehicle driving past and I didn't pay much attention. The vehicle made a U-turn and came speeding towards my direction and I could see it was a silver Jeep," he said.

Scott-Crossley's lawyer, Charl van Tonder, asked Mabunda if he was sure if the vehicle that knocked him down was indeed a Jeep. However, Mabunda said he saw the front part of the vehicle and he was certain that it was a Jeep.

Prosecutor Eric Mabapa accused Van Tonder of trying to force Mabunda to change his statement regarding the make of the car that hit him. Parolee Scott-Crossley is facing charges of attempted murder for allegedly running over Mabunda with his car and malicious damage to property for breaking his phone during their earlier confrontation in Hoedspruit.

Mabunda was working at Wildlife Rehabilitation Centre at the time of the incident and has not returned to work as he now uses crutches to walk.

Speaking to Sowetan after the court proceedings, Scott-Crossley denied he was racist and hated black people as he lives and works with them.

Scott-Crossley, one of the men involved in throwing Nelson Chisale's body to lions on a farm in 2004, was set free on parole in August 2008. His life sentence was substituted with five years' jail term on the lesser offence of being an accessory after the fact after an appeal.

Gambushe played Nonhlanhla in Imbweu: The Seed.
Entertainment
3 years ago
Next Article