'I would have said no to dagga smoking': Bheki Cele 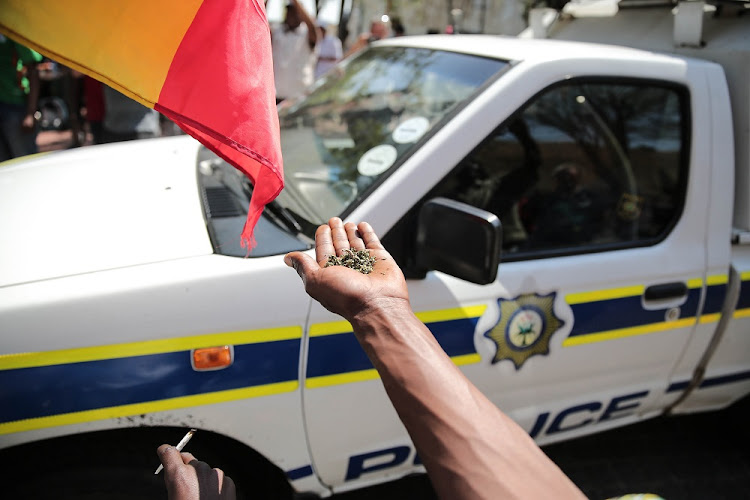 Members of the Rastafarian community celebrates with police nearby, 18 September 2018, at the Constitutional court in Johannesburg, after the court ruled that the private use of marijuana is not a criminal offence.
Image: Alaister Russell/The Sunday Times

While the debate rages over people being allowed to grow and smoke dagga in private‚ that would not have been the case if police minister Bheki Cele had his way.

“If the judge had asked me‚ I would have said no dagga smoking‚” Cele told students at the University of Zululand on Tuesday.

He visited the crime scene where first-year student Sazi Ngubo was stabbed to death during an argument on the campus in northern KwaZulu-Natal on Sunday. Moments after the fatal stabbing‚ fellow students beat and severely injured his alleged killer in an act of mob justice.

The Constitutional Court ruled on Tuesday that adults were legally able to cultivate and smoke dagga in a “private space” – which has yet to be clearly defined.

Cele told students that he believed dagga was effectively a gateway drug.

“Dagga smoking is an entry point of serious other drugs. They start with dagga‚ mandrax and cocaine. Which means now‚ everybody is on the same path to start drugs‚” he said in a recording broadcast by SABC television.

The Constitutional Court has ruled in favour of the use and possession of dagga for private use. We listed some of the best #dagga memes we found on Twitter.

Victory for dagga users as ConCourt grants permission for private use

Dagga users in South Africa are free to blaze their joints in the privacy of their homes without fear of being prosecuted after a Constitutional ...
News
3 years ago

Ban on private use of dagga at home is ruled unconstitutional

Freeing use of the herb a legal high

"You can get stoned at home."
Opinion
3 years ago
Next Article