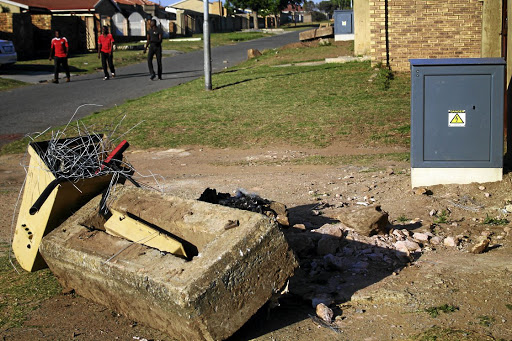 Eskom said most Soweto households don't pay for electricity and were resisting the installation of prepaid meters, leaving it with a headache.

Eskom only provides about 180 000 households with electricity but the township's principal debt is R7-billion, which has accumulated interests of
R8-billion, Phasiwe said.

"We disconnect people who don't pay, but some work with our technicians to reconnect themselves," Phasiwe said.

A North West municipality has shot itself in the foot spending R15-million to instal faulty electricity smart meters.
News
3 years ago

He said around 17 000 customers in Soweto have had their electricity cut off due to nonpayment but many illegally reconnected themselves.

Cleopatra Shezi, the secretary of the Soweto Electricity Crisis Committee, which opposes the installation of prepaid meters, said most Sowetans can't afford to pay for electricity.

"We can't afford to use our last money that should get us bread and pay for electricity," Shezi said.

She said illegal re-connections would continue until there was a "reasonable solution" such as Eskom investing in alternative sources of energy like wind and solar for people's benefit.

Thandi Sangweni, from the Gauteng Concerned Committee, said: "There's too much poverty in Soweto, and, unfortunately, prepaid meters mean if one doesn't have money they can't have electricity."

Jail or a whopping fine for meter tampering

A man who tampered with electricity meters on farms in the Free State faces a grim choice – pay Eskom nearly R1-million or go to jail.
News
3 years ago

She said people have a right to refuse prepaid meters.

The debt (90 days or older) of all defaulting SA's municipalities combined was standing at R15-billion, as only about 28 municipalities fully adhere to payment arrangements on their electricity accounts.

Phasiwe said the only viable solution was switching to prepaid metering, which Sowetans strongly oppose, with only 40000 having prepaid meters.

"We're not targeting Soweto with prepaid meters, we just want all our customers to monitor their usage," Phasiwe said.

Phasiwe said some of those on prepaid in Soweto had by-passed the Eskom prepaid meters or sourced power coupons from the illegal ghost vendors.