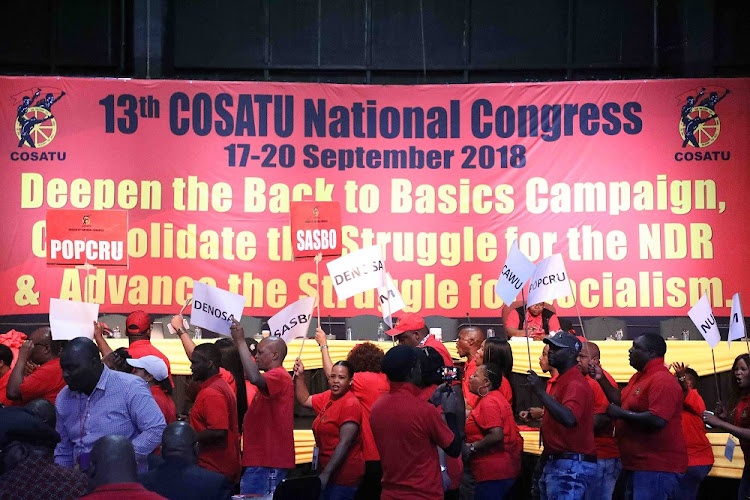 Members of Cosatu singing ahead of the federation's 13th National Congress at Gallagher Estate in Midrand on September 17 2018.
Image: THULANI MBELE

Cosatu is facing a financial crisis as it is owed more than R45-million by its affiliates.

The financial situation is so dire that the trade union federation was running at a deficit of over R16-million at the end of December last year.

In its financial report to be presented to delegates at the federation's national congress in Midrand, north of Johannesburg, today, Cosatu says cash-flow problems have resulted in it accumulating liabilities as it was unable to settle dues to suppliers for services rendered.

"The primary source of income is affiliation fees which didn't reflect movement because there was a decline in membership. During this period the federation had to operate under immense financial difficulty to meet its financial obligation which is contributed by lack of affiliates to settle their monthly debts," Cosatu's financial report states.

Cosatu affiliates will debate mechanisms for the development of caring and empathic public institutions to combat poor service delivery.
News
3 years ago

Outgoing Cosatu president S'dumo Dlamini said if this continued Cosatu would not be able to sustain itself.

Cosatu's financial report notes: "The federation's primary income is through affiliation fees generated from affiliates which forms the basis of budget to sustain the federation operating activities."

In his address to delegates, President Cyril Ramaphosa said workers who left Cosatu must be brought back. "Congress must agree on how to reach out to those who have left the federation for various reasons and draw them back into the revolutionary fold."

Cosatu financial woes can also be linked to the fact that the federation spent more than R21-million on bad debt, over R33-million on salaries and more than R1-million on legal fees.