Samaritan attacked by men he was allegedly trying to assist 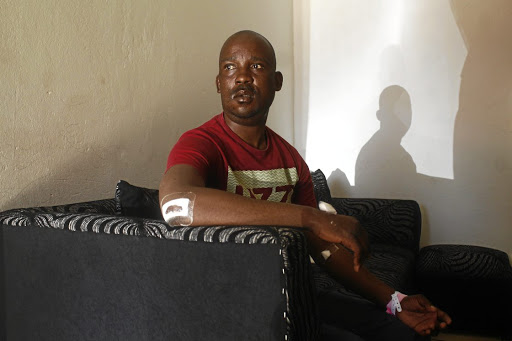 Isaac Mkhwanazi has vowed not to assist white people after being allegedly beaten by two white men.
Image: KABELO MOKOENA

Yet another alleged racist attack has left a 38-year-old Ekurhuleni man with a broken jaw and fractured ribs.

A white father and his son allegedly attacked and called Isaac Mkhwanazi the k-word when he tried to assist them after their vehicle broke down on Tuesday.

Mkhwanazi was discharged from hospital on Saturday and is still nursing the injuries he sustained during the attack.

His alleged attackers, Francois and Ryno Marais, were charged with attempted murder and appeared briefly in the Benoni Magistrate's Court on Thursday.

They were released on a warning despite facing a schedule 5 offence. Their case was postponed to October 5 for further investigation.

Mkhwanazi told Sowetan said he was baffled why the pair attacked him.

"I know them because I have seen them around before in the area where I work.

"Their vehicle was stuck in the middle of the road, so I stopped mine and asked them if they needed assistance. They reacted with aggression and I didn't know what to make of it," Mkhwanazi said.

"They told me to piss off and called me a k***r a few times," Mkhwanazi said.

He said Francois then punched him in the face.

The release of two white men accused of assaulting and dragging a black man has triggered a community in Mpumalanga to vent their anger by burning a ...
News
3 years ago

"I fell to the ground and quickly got up. I didn't want to fight back because they are big and I would not have been able to fight back," he said.

Mkhwanazi said the duo repeatedly hit and kicked him as he lay on the ground.

He escaped by grabbing their car keys and running to the Putfontein police station.

"I still don't know why they attacked me. I will never try to help white people again if I find them stranded because they continue to treat us like animals," he said.

Sowetan contacted both Francois and Ryno for comment but they both declined, asking to be called back on Monday.

"I cannot talk to you right now because I am in church. Call me back tomorrow," Ryno said before hanging up.