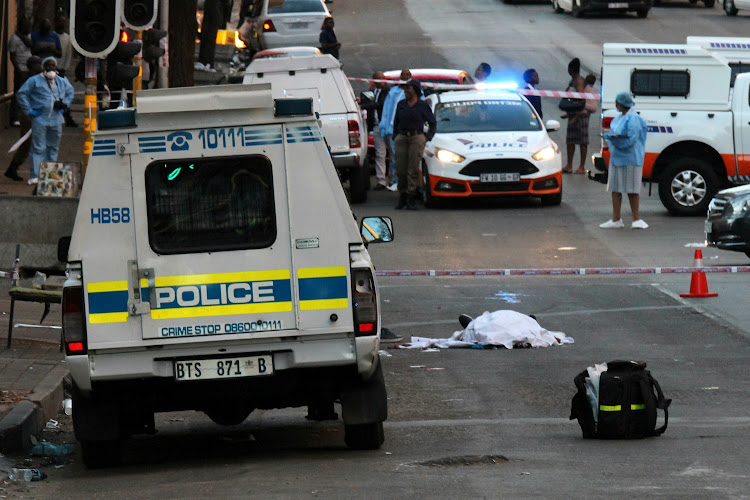 An off-duty officer from the Johannesburg Metro Police Department was shot and killed on Thursday afternoon about 3pm in Bruce Street, Hillbrow, Johannesburg on Tuesday, September 11 2018.
Image: Nico Gous/TimesLIVE

A Johannesburg metro police (JMPD) officer who was gunned down in Hillbrow last week has been hailed as a 'gifted and selfless prophet'.

Dingaan Neludani, 45, was on foot when he was shot several times in the upper body. He was declared dead on the scene. Neludani was also serving as a pastor at Word of Faith Ministries in Kibler Park, south of Johannesburg.

A fellow pastor at the church, Mduduzi Nyoni, told Sowetan on Monday that Neludani was a spiritual father of congregants who received the news of his tragic death via social media.

“I saw tags on his Facebook timeline while I was scrolling through my phone and I saw messages of condolence from church members, people and his colleagues. I was shocked,” he said.

Nyoni said Neludani was the founder of the annual Gauteng Gospel Music Awards that have been held for the past three years. He said the awards gave upcoming gospel artists the platform for recognition because Neludani was passionate about the  music. Ayanda Tsawe, a gospel artist, said Neludani was killed while preparing  for this year’s leg of the gospel music awards.

An off-duty Johannesburg policeman was murdered in Hillbrow on Thursday afternoon.
News
3 years ago

“I have been trying to get closure about his murder but I cannot come to the conclusion because his character was of a person who could not hurt anyone,” said Tsawe.

Congregant Zama Zondi described Neludani as  an influential  leader.“He was a father to the fatherless and a selfless man that put others first. I have never met a man as humble as him,” said Zondi, adding that Neludani ’s death has had a knock-on effect  to his church.

Police spokesperson Captain Kay Makhubele said the motive for the murder was still unknown, adding that a suspect had been arrested, noting the second suspect fled with the metro police officer's service pistol. However, police had since found the pistol used to kill Neludani.

Metro police spokesperson Wayne Minnaar said Neludani, who joined JMPD in 2007, "was a very dedicated and loyal officer who was never charged for misconduct. He was very hardworking and was also a pastor on his spare time.”