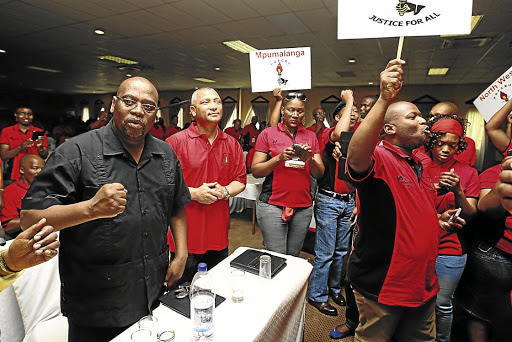 Cosatu's national conference is underway and it is expected to debate different resolutions from its affiliates.
Image: Vathiswa Ruselo

Cosatu affiliates will debate mechanisms for the development of caring and empathic public institutions to combat poor service delivery and a lack of efficiency in the public service.

To achieve this, the South African Democratic Teachers Union (Sadtu) has proposed the Cosatu congress that starts today should resolve to make a "concerted effort to change the image of public institutions".

More than 50% of the trade union federation's 1.6-million members are employed in the public service.

According to the resolution, public servants should also adopt the "Thuma Mina" philosophy advocating for honesty, integrity and volunteerism.

Facilities such as hospitals, schools, and police stations - where some of Cosatu's biggest affiliates have most members - have been rendering inferior services to communities, with the unions admitting service could be improved.

A 2017 study by the Centre for Development and Enterprise found that pupils lose about 40% of learning time every year in South African schools because teachers habitually skip classes.

Sadtu's proposal will likely receive the support of National Union of Mineworkers (NUM).

NUM president Joseph Montisetse told Sowetan's sister publication Business Day in an interview recently that affiliates were concerned about the deteriorating state of public health institutions, noting that although resources played a role, the quality of service was an integral part of the problem.

In its proposed resolution on the national health insurance, NUM, National Education, Health and Allied Workers Union and other Cosatu health sector unions said incompetent management of institutions, corruption, understaffing and the outsourcing of key functions at provincial, district and institutional levels also contribute to poor service delivery in the public health sector.

"Workers, bureaucracy and political administration must be oriented towards service delivery and live up to the dictates of the Freedom Charter. Lack of professionalism contributes to the dissatisfaction of communities," said Sadtu.

Cosatu unions also want a resolution on the conduct of its leaders who get elevated to prominent government positions through its alliance with the ANC.

In its political report, the trade union federation raised concern over what it described as the ANC's indecision to access state power to drive "progressive policies to transfer economic power to the working class and poor".

Cosatu is pushing for the establishment of a state-owned bank.
News
3 years ago
Next Article